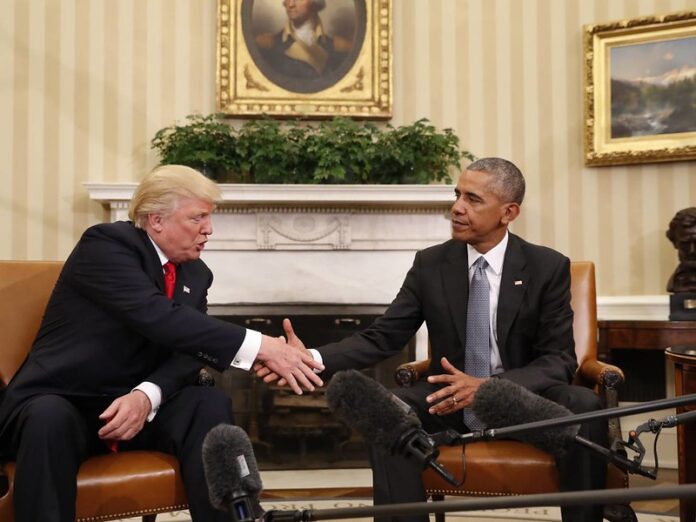 “As the nation prepares to celebrate Independence Day, C-SPAN is releasing the results of its fourth Historians Survey of Presidential Leadership, in which a cross-section of presidential historians and professional observers of the presidency ranked the country’s 44 former chief executives on 10 characteristics of leadership,” C-SPAN said in a press release.

To no one’s surprise, Abraham Lincoln ranked first. He has held that position in the previous three versions of the survey.

Former President Obama moved up in his ranking, rising from his #12 ranking in 2017 to #10 in the most recent results. Obama’s climb to the top 10 happened because his rating improved greatly in the relations with Congress category, where he jumped from 39th to 32nd. And in the performed within context of times category, Obama also improved from 15th to 10th.

The historians revealed their thoughts on President Trump, “Former President Donald Trump enters the ranks for the first time in the #41 position. His highest rankings were in Public Persuasion (#32) and Economic Management (#34). The historians ranked him in last place (#44) for Moral Authority and Administrative Skills,” the press release stated.

In the category of “Moral Authority,” Obama ranked #6, behind only Lincoln, Washington, Franklin D. Roosevelt, Eisenhower, and Theodore Roosevelt.

Participants in the survey included 142 historians and “professional observers of the presidency,” C-SPAN noted. In the survey, which was first conducted in 2000, participants rate each president based on 10 qualities of presidential leadership: Public Persuasion, Crisis Leadership, Economic Management, Moral Authority, International Relations, Administrative Skills, Relations with Congress, Vision/Setting an Agenda, Pursued Equal Justice for All and Performance Within the Context of the Times.

Trump, at #41, scored right below William Henry Harrison, who died of pneumonia after just 31 days into his presidency. Those who ranked below Trump were: Franklin Pierce, he signed the Kansas-Nebraska Act that led to Bleeding Kansas; Andrew Johnson, who was impeached and opposed rights for black Americans; and James Buchanan, whose ineffective leadership is widely considered a leading factor in the Civil War.

Douglas Brinkley, a Rice University professor who has advised C-SPAN on the survey since its first iteration, said one reason for Trump’s low ranking could be his 2021 impeachment, which made him the only U.S. president ever to be impeached twice.

“This year, people compared which is worse: Watergate or the Trump impeachment?,” Brinkley said in a C-SPAN press release.

C-SPAN said that the category with the most change in rankings over the last 20 years was pursued equal justice for all. Woodrow Wilson’s category ranking dropped 17 points since the first survey to this year’s.

“Despite the fact that we’ve become more aware of the historical implications of racial injustice in this country and we’re continuing to grapple with those issues, we still have slaveholding presidents at or near the top of the list,” Howard University professor Edna Greene Medford said in the press release.

The biggest increase since the 2000 survey to 2021 was garnered by Ulysses S. Grant, who served during Reconstruction. Grant was ranked No. 33 in the first survey, and now stands at No. 20.

“Grant,” Brinkley said in the press release, “is having his Hamilton moment.”