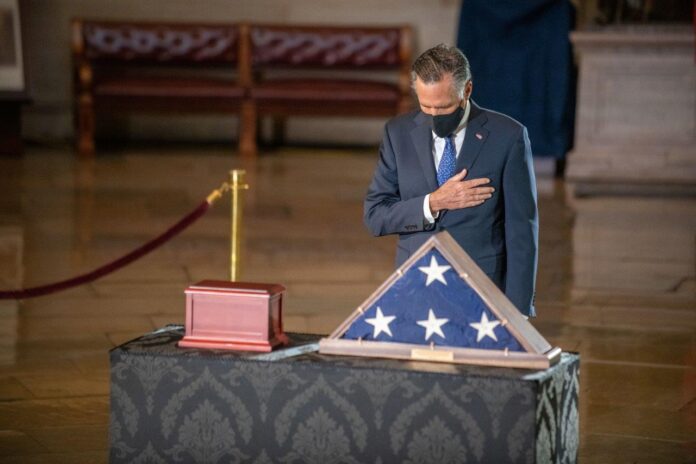 Now that Officer Sicknick’s cause of death is being discussed more openly among the left and the right, there is a certain amount of derision taking place. The right-wing wants to know more and the left is being a bit rude about it. They are calling it a “truth movement” but that obscures the true issues here.

For the past three days, the House Democrats have tried to piece together the events that took place at the Capitol on January 6. Officer Sicknick was allegedly bludgeoned with a fire extinguisher during the attack. While the truth of this matter is still being hotly debated, there is no denying the fact that numerous cops were attacked that day.

How they survived is beyond us. It was a combination of perseverance and dumb luck. The mob that arrived at the Capitol was prepared to kill if they had to. They had even constructed a makeshift gallows and “Hang Mike Pence!” chants broke out. Yes, the American people deserve to know what really happened to Officer Sicknick but it is not hard to establish intent that day.

There’s just one problem. The Democrats have already noted that the officer was killed in their pretrial memo. That is all well and good but why hasn’t anyone been charged yet? We want to know where they are getting their evidence from. A crime this heinous should probably be linked to a specific party before the accusation is made, in the vast majority of instances.

Andy McCarthy of National Review has examined the situation and they have come to some fairly simple conclusions. That’s what happens when emotion is finally removed from the situation. Let’s take a closer look at what they had to say, shall we?

“More to the point, unidentified law-enforcement officials told CNN of findings by medical examiners that Sicknick’s remains bore no signs of blunt-force trauma and that the fire-extinguisher account was not true. There is a video from the day of the siege of an incident in which a rioter hurled a fire extinguisher at security personnel. There has been no public claim, however, that Sicknick was involved in that incident.

t appears certain that Sicknick was not rushed to the hospital directly from the Capitol. Several reports indicate that he returned to his police office. Hours after the siege ended, he texted his brother to say he had been “pepper-sprayed twice” but was otherwise “in good shape.” Tucker Carlson notes that, according to the head of the Capitol police union, Sicknick had a stroke. That is consistent with a report from KHOU in Houston regarding what the Sicknick family was told about how the officer died,” National Review reports.

The Pro Publica piece that was sourced for the aforementioned piece is pretty definitive, too. Sicknick’s own brother was quoted, which is a pretty tough piece of evidence to dispute. The quote that we are about to share is a very telling one, indeed. We’re not sure how the Democrats will continue to argue in favor of their made-up timeline.

“He texted me last night and said, ‘I got pepper-sprayed twice,’ and he was in good shape,” said Ken Sicknick, his brother, as the family drove toward Washington. “Apparently he collapsed in the Capitol and they resuscitated him using CPR.”

But the day after that text exchange, the family got word that Brian Sicknick had a blood clot and had had a stroke; a ventilator was keeping him alive.

“We weren’t expecting it,” his brother said.

The feds probably shouldn’t continue to focus on this specific incident during the impeachment trial, especially since they can’t seem to prove it in any meaningful way. Perhaps the medical examiner could shed some light on what took place as well? We are trying our best to be fair and partial here but there’s not much information to work with. It’s best that they stop focusing on this at the moment.