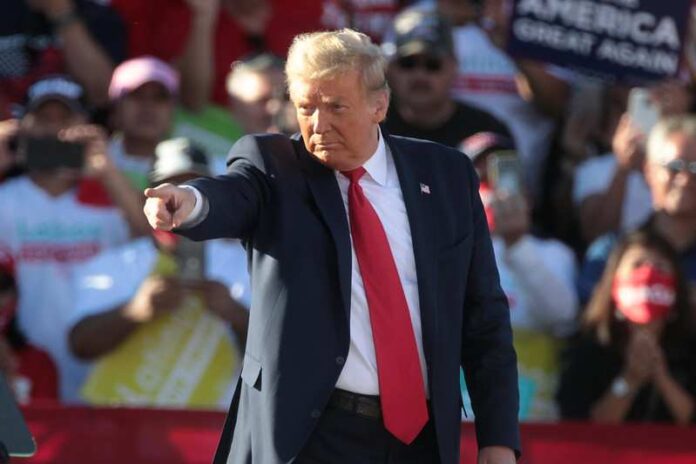 For nearly five years, the Democratic Party has tried to get a peek at Donald Trump’s tax returns. They tried every way possible to force him to hand them over. But it would take a court ruling to get him to release them to liberals. So they needed the tax returns to smear the man while he was president. And now that they finally have their pointy fingers on them, there is not much they can do to him.

The Democrats were drooling at the possibility of Donald Trump being charged with massive tax crimes. But that wish list all came crashing down when Manhattan District Attorney Cy Vance that there are no charges that he can pin on Trump.

Democrats at all levels were sure that he paid out “hush money” payments or somehow doctored the numbers of his property values. But they could find no evidence that any of the illegal activity they thought was there was real.

Donald Trump’s attorney is Ronald Fischetti. He had called Cy Vance inquiring about what was going to come out of his office. And all he could come up with was some failure by executives to pay taxes on benefits they had received. And even those charges are in dispute as they do not know if they can bring them up on the executives.

In a report released, it was noted that Fischetti had inquired if any other charges were going to come, and there was nothing that could be said. Further, Vance had stated that Donald Trump would not face any charges.

Letitia James is the New York Attorney General. And she was all excited about having charges and taking Trump into custody. But her bubble was popped when she found out that Donald Trump is an honest man that takes care of his business.

Fischetti stated that “It’s like the Shakespeare play Much Ado About Nothing. This is so small that I can’t believe I’m going to have to try a case like this.”

The Democrats have been going after Trump for half a decade. First, they wanted to investigate him for what they were calling “hush” payments to a person that claimed to have had an affair with Trump. But there was no proof found. The media and their fake sources did all that were circulated.

Donald Trump did not just sit back and let the Democrats attack him without a fight. He stated that James was pushing a fake investigation for political reasons. She saw an opportunity, and she tried to take it. She wanted to be the one that could claim she took down Donald Trump. Except she ended up with egg on her face.

James stated that she would “join with law enforcement and other Attorney Generals [sic] across this nation in removing this President from office. It’s important that everyone understand that the days of Donald Trump are coming to an end.” At the time, she was trying to get into the Attorney General’s office.

It was clear that James never really knew the facts of what she was trying to claim about Donald Trump. The former president stated that James’ actions were that of a corrupt nation. He noted that “If you can run for a prosecutor’s office pledging to take out your enemies, and be elected to that job by partisan voters who wish to enact political retribution, then we are no longer a free constitutional democracy.”

The Democrats want to turn America into a failed Democracy. They want to see freedom fall and people suffer. Under their rule, the country will be where the leaders abuse the people and walk all over the poor. James is the perfect example of the kind of corruption that sits at the core of the Democratic Party.