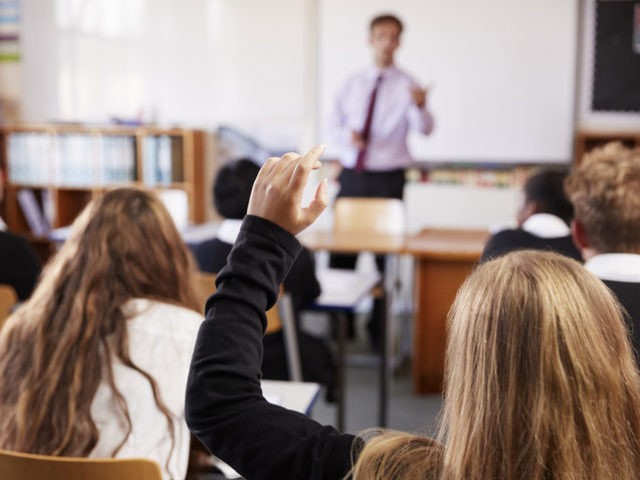 In June, an eighth-grade Spence teacher showed students in her history class an episode of Fumudoh’s Showtime series Ziwe, during which the comedian asked writer Fran Lebowitz, “What percentage of white women do you hate? And there is a right answer.”

In addition, the footage included Fumudoh reading obscene lyrics of the rap song “WAP,” aka “Wet Ass P–y,” by Cardi B and Megan Thee Stallion to women’s rights leader Gloria Steinem — and asking if she felt “empowered” by them.

Spence Principal Bodie Brizendine issued an apology message to parents in which she stated, “This video is not part of the Spence curriculum,” and added:

Our teacher and the School acknowledge that sharing a satirical video that made fun of white women was a significant mistake. We take this seriously; it is never acceptable to ridicule anyone at any time, and this is contrary to everything we know about our mission. We fully trust the professionalism of our dedicated faculty, and we will be strengthening faculty protocols.

However, one parent, an alumna of the K-12 elite school and a former trustee, reportedly wrote back to Brizendine that she and others believe the principal used language that minimized the incident.

“Choosing to label the video as ‘satirical’ and that it ‘made fun of’ and ‘ridicules’ is a gross understatement,” the parent wrote, noted the Post. “That you ‘fully trust the professionalism of your dedicated faculty and will be strengthening protocols’ is not an acceptable response.”

The parent reportedly wrote back to Brizendine her letter “pushed” her “over the edge.” In addition, she expressed outrage that the board of trustees had nothing to say about the matter.

In January, Spence’s “Anti-Racism Task Force” presented its report to the board of trustees. According to the document, the board and head of school formed the task force to move “all constituencies of the Spence community toward a more equitable and inclusive environment.”

According to the document, the Anti-Racism Task Force was “inspired by a group of alumnae – Black Spence Speaks – who, wanting to improve our school, requested substantial and sustainable change pertaining to issues of race, anti-black racism and other forms of oppression.”

“Members of the Equity Committee of the Board came together with the Head of School and the Director of Institutional Equity to draft the charge for the Task Force,” the document adds. “This charge was then approved by the full Board of Trustees and shared with the community at large.”

According to the school’s website, Brizendine announced her retirement in December, and, in June, the board of trustees appointed Felicia Wilks to serve as head of school, beginning July 2022.

Parents and teachers at other private New York City schools have also expressed outrage over the push to adopt a woke education model centered on the Marxist ideology of Critical Race Theory, which embraces the concept that all American institutions are systemically racist, with whites as oppressors and blacks as victims.

In April, parent Andrew Gutmann pulled his daughter out of the elite Brearley School for girls.

I cannot tolerate a school that not only judges my daughter by the color of her skin, but encourages and instructs her to prejudge others by theirs. By viewing every element of education, every aspect of history, and every facet of society through the lens of skin color and race, we are desecrating the legacy of Dr. Martin Luther King Jr., and utterly violating the movement for which such civil rights leaders believed, fought, and died.

“I object to the charge of systemic racism in this country, and at our school,” Gutmann continued. “Systemic racism, properly understood, is segregated schools and separate lunch counters. It is the interning of Japanese and the exterminating of Jews.”

We have not had systemic racism against Blacks in this country since the civil rights reforms of the 1960s, a period of more than 50 years. To state otherwise is a flat-out misrepresentation of our country’s history and adds no understanding to any of today’s societal issues. If anything, longstanding and widespread policies such as affirmative action, point in precisely the opposite direction.

Also in April, former Grace Church High School teacher Paul Rossi shared with Weiss he was publicly condemning the “antiracism” training and pedagogy to which he had been subjected:

“Antiracist” training sounds righteous, but it is the opposite of truth in advertising. It requires teachers like myself to treat students differently on the basis of race. Furthermore, in order to maintain a united front for our students, teachers at Grace are directed to confine our doubts about this pedagogical framework to conversations with an in-house “Office of Community Engagement” for whom every significant objection leads to a foregone conclusion. Any doubting students are likewise “challenged” to reframe their views to conform to this orthodoxy.

“Students are pressured to conform their opinions to those broadly associated with their race and gender and to minimize or dismiss individual experiences that don’t match those assumptions,” Rossi explained.

He added that, in this current system of indoctrination, while one group of students is labeled “oppressor,” those considered “oppressed” are assigned an identity of “moral superiority.”

“All of this is done in the name of ‘equity,’ but it is the opposite of fair,” Rossi asserted. “In reality, all of this reinforces the worst impulses we have as human beings: our tendency toward tribalism and sectarianism that a truly liberal education is meant to transcend.”

In May, parents of first-grade children at New York City’s Dalton School were also outraged when they discovered their children were shown a “sex ed” cartoon video in which young children talked about “touching themselves” for pleasure.

“We are not ‘confused,'” one parent said, according to the Post, referring to the attempt by school administrators to pacify parents by informing them they had “misinterpreted” what their children were learning.

“We are in fact just seeing very clearly for the first time what a ‘progressive’ education really means at Dalton,” the mother added. “The fact that the school then gaslit parents into thinking we are confused is abysmal.”

In December, faculty members at the Dalton School issued an eight-page manifesto, the demands of which included sweeping changes in personnel, academic curriculum, and the ways in which black students are to be treated differently in discipline matters and in the assessment of their academic performance.

The document included statements that directed all administrators, faculty, and parent volunteers to “undergo yearly anti-racist training,” and that demanded all of Dalton’s administrators and staff to produce “public anti-racism statements.”

Jim Best, who headed the school, announced in April he would be resigning after pushing what parents referred to as an “obsessive” and “wildly inappropriate” social justice agenda, which even included reenactments of “racist cops” in science classes, according to the Post.