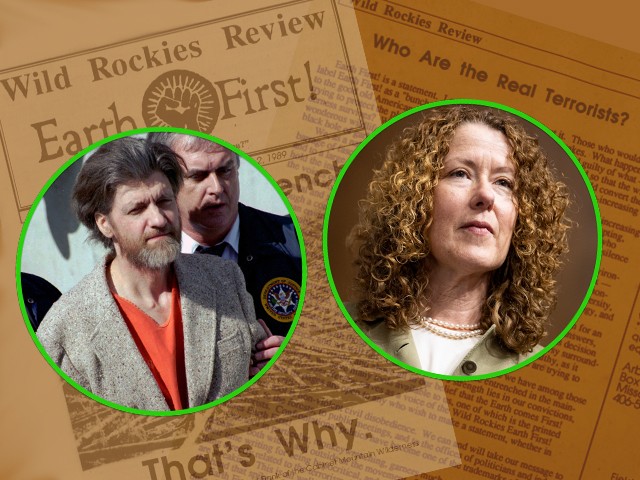 Kaczynski, after his nearly 20-year-long bombing spree that killed three people and injured 23, was sentenced to eight consecutive life terms in prison before he invited Earth First! journal editor Theresa Kintz to conduct his first media interview in 1999. Kaczynski said Kintz was the “one journalist” he would “be prepared to trust.”

“As I mentioned earlier, I’ve given no media interviews in part because mainstream journalists have shown themselves to be completely unscrupulous and untrustworthy,” Kaczynski wrote to Kintz. “But you are one journalist whom I would be prepared to trust. Would you like to interview me for the Earth First! Journal?”

The backstory of Kintz’s interview with Kaczynski, as well as audio from the interview, was highlighted in a 2020 documentary series called Unabomber: In His Own Words.

Earth First! is a self-described “radical environmental movement,” though it operates as a group with a symbol, publication, and the motto “no compromise in defense of mother earth.” The FBI linked Earth First! to domestic terrorism because its group members engaged in criminal activity in the 1980s and 1990s — such as tree spiking and property destruction — that the FBI identifies as ecoterrorism.

Tracy Stone-Manning, Biden’s nominee to head the BLM, was a member of Earth First! when she was a graduate student at the University of Montana in Missoula and was involved in a criminal tree spiking case during that same timeframe, about 30 years ago.

As Breitbart News reported of Stone-Manning’s role in the case:

In 1989, Stone-Manning mailed a letter to the U.S. Forest Service on behalf of John P. Blount, an individual in her “circle of friends,” crudely warning federal authorities that trees in Idaho’s Clearwater National Forest that were scheduled to be cut down had been sabotaged with metal spikes to prevent them from being harvested. Tree spiking, as this form of sabotage is called, is both a crime and, according to the FBI’s definition, an act of ecoterrorism that can be fatal to loggers or millworkers processing the spiked trees.

After the Forest Service received the warning letter, Stone-Manning and six other individuals in Missoula were the target of a 1989 grand jury investigation for which they were subpoenaed and required to submit finger prints and hair samples. However, the 1989 grand jury did not uncover enough evidence to charge Blount or anyone else with the crime. The case was not solved until Blount’s ex-girlfriend reported him to authorities two years later, and in doing so, also named Stone-Manning as the person who mailed the letter for him. In exchange for immunity, Stone-Manning testified in the 1993 trial against Blount, who was convicted for the tree spiking crime and sentenced to 17 months in prison.

Former BLM Acting Director William Perry Pendley references interviews in which Stone-Manning admits she did not come forward about her knowledge of Blount’s 1989 tree spiking until her 1993 testimony. Stone-Manning later filled out a questionnaire for her Senate confirmation hearing with inaccuracies related to the tree spiking case.

Kintz asked Kaczynski, who authored the famous 35,000-word manifesto Industrial Society and Its Future, during their interview, “Did you ever think of yourself as an Earth Firster?”

Kaczynski replied, “Not really. As sort of a — sympathizer’s too weak a word — but sort of, Earth Firster satellite?” Kaczynski added that he did not want to subscribe to the Earth First! journal because he felt it might put him on law enforcement’s radar.

“But I did pick up a copy of the journal, and I saw a lot in it that I liked,” Kaczynski said.

Kintz wrote how Kaczynski admitted to her that he “committed quite a few acts of monkeywrenching during the seventies,” prior to his bombings. Monkeywrenching, an overarching term for ecological sabotage that can be criminal depending on the act, was a common tactic of Earth Firsters.

Kaczynski suggested radical environmentalist and author Edward Abbey, who served as an inspiration for Earth First!, inspired Kaczynski, as well.

“I read Edward Abbey in mid-eighties and that was one of the things that gave me the idea that, ‘yeah, there are other people out there that have the same attitudes that I do,'” Kaczynski said to Kintz. “I read The Monkeywrench Gang, I think it was. But what first motivated me wasn’t anything I read. I just got mad seeing the machines ripping up the woods and so forth.”

Kaczynski was arrested for his bombings in 1996 at his remote Montana cabin near Lincoln, Montana, under two hours from Missoula. In his interview with Kintz, Kaczynski revealed he would travel at times to the University of Montana library in Missoula, the same school where Stone-Manning was a graduate student and Earth First! member in 1989 and where Earth First! had a large and active presence.

Stone-Manning also helped in publishing Earth First! ideas. The Associated Press reports that while she was a graduate student at the University of Montana in 1989, Stone-Manning “helped edit” the Missoula-based Earth First! newsletter called the Wild Rockies Review, which according to its masthead sought to “further the Earth First! philosophy.” Though the editors and contributors of the Wild Rockies Review at that time apparently used pseudonyms or just last names, the 1989 spring issue listed a “Stone” as providing assistance to the issue. In 1989, Stone-Manning was known by her maiden name of Tracy Stone.

That issue’s lead editorial included a defense of tree spiking and monkeywrenching.

Stone-Manning is facing enormous pressure from Senate Republicans to withdraw her nomination to head the BLM over her involvement in the 1989 tree spiking case; however, neither the White House nor any Senate Democrats have expressed public opposition to her despite being pressed on the matter.