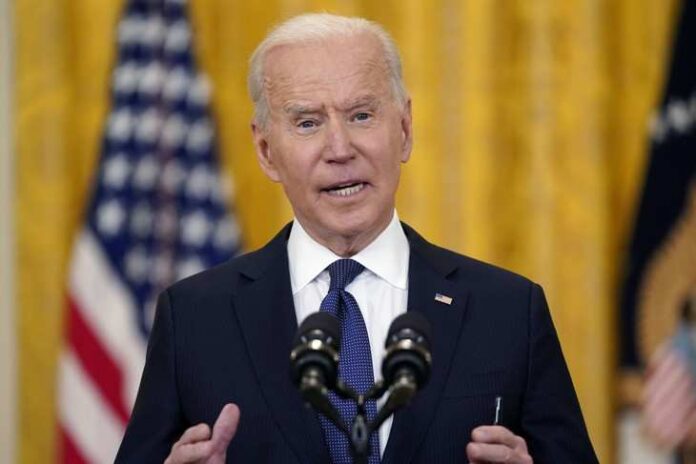 If there is one thing that the Democrats do well, they love to brag about themselves. They love to take credit from the people that did the work. Most of the time, their bragging attempts to make them look better than others around them because they love the spotlight. And they certainly are not willing to share the spotlight with anyone.

Joe Biden is no exception to that rule. He loves to brag about himself and even steal credit from his predecessors. He tried to take credit for the vaccine that Donald Trump developed. And it looks like he is going to try and do the same when the time comes for him to unmask the nation.

But his latest bragging moment has a lot of people questioning his mental state. Over his term, he has let inflation and prices for commodities skyrocket out of control. He is responsible for higher-than-normal interest rates and people losing their jobs because of his killing programs.

The cost of food, lumber, cars, and gas is all on the rise. People are already at the breaking point financially, and here comes Biden bragging about how he has helped prices fall over the past several months.

Planning a cookout this year? Ketchup on the news. According to the Farm Bureau, the cost of a 4th of July BBQ is down from last year. It’s a fact you must-hear(d). Hot dog, the Biden economic plan is working. And that’s something we can all relish. pic.twitter.com/7h9qLauIbC

He stated, “Planning a cookout this year? Ketchup on the news. According to the Farm Bureau, the cost of a 4th of July BBQ is down from last year. It’s a fact you must-hear(d). Hot dog, the Biden economic plan is working. And that’s something we can all relish.”

Aside from the terrible puns and inaccurate information Biden has got to be kidding. Prices are not falling. They are only on the rise. But according to Biden, the supplies for a cookout are about the only things that have not gone up.

This is simply not true. pic.twitter.com/jXiSw3byjb

He wants people to forget about the high price of gasoline and “relish” the fact that hotdog prices have stayed the same. And even that point of his brag is under contest because the food price has gone up a lot to the point that people cannot buy enough to feed their families in some households.

Prices are up all around the country. And where prices were already high, they are out of the world now. All anyone can do when Biden speaks is shake their head in disbelief. But this time around, his statement caused many people to hold their heads in their hands and wonder when the pain and suffering will be over.

Biden has inflated the overall cost of living by thousands of dollars, and all he can do is brag about saving a few pennies on a hotdog. People are fed up with the circus clown approach to politics. Most of the nation did not even vote for the man, and those that did were either dead or had twenty ballots sent to their homes.

The increase in prices is a direct result of the stimulus packages that Biden pushed through without stopping and thinking of what it will do to the cost of living in America. Many families are on the brink of disaster, and there is not much they can do about it. All they can do is sit back and hope that their jobs are not next on the chopping block. Because that penny they saved at the grill will not make a bit of difference in the long run.

Biden’s team is just trying to make people see a little ray of hope where there is no hope. For the past six months, Biden has only made things terrible in America. He is so far disconnected from the state of the country that he will never connect with what needs to be done to fix the agony he is putting people through.

But this is precisely what the progressives want for America. They want to see high prices and people losing their homes because it gives them the chance to control their lives. Big government will have to step in and help them. Then they will be able to brag that they were able to help the people they destroyed with policies designed to hurt people.