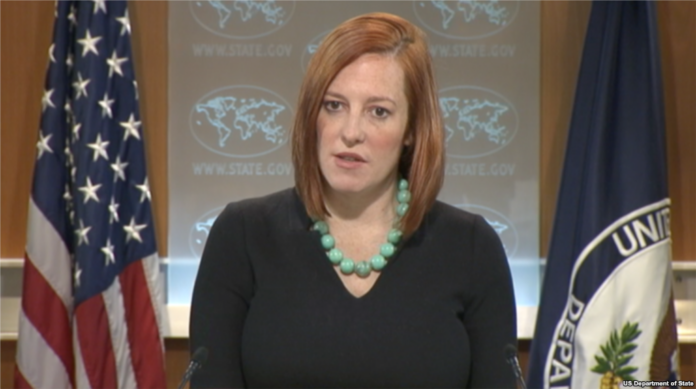 White House press secretary Jan Psaki isn’t known for her kindness toward reporters from non-liberal outlets, but then again she’s not known for her accuracy either, so the pair tend to go hand in hand. What she is known for, is giving Fox News’s Peter Doocy a difficult time when he questions some of the Biden administration’s antics while questioning during press briefings.

The fiery-haired communications officer tends to make her words match her hair color, which makes it all the sweeter when she’s caught, red-handed, as it were, making things up as she goes along. Despite her constant proclivity to “circle back” to topics that are problematic, she still can’t seem to resist setting the record straight on issues where the administration gets a bad name, and the issue of the ludicrous “defund the police” movement is one such issue.

Combing Doocy and the insane progressive policy and what you get is a recipe for a good time (if you’re a conservative that enjoys watching liberals get caught lying and sticking their foot in their mouths, which of course, we here all are).

The fireworks began at Monday’s press briefing when Doocy asked about comments made by Biden adviser Cedric Richmond during an appearance on Fox News over the weekend. Richmond had been addressing the American Rescue Plan which one writer in the Independent Journal Review called “the larded-up COVID-relief package passed along strictly party lines.”

If you understand the current demographics of Congress then you know that conservatives can’t be happy about the bill, however, Richmond attempted to turn the whole thing around saying, “Let’s talk about who defunded the police. When we were in Congress last year trying to pass a rescue plan — I’m sorry, not the rescue plan but an emergency relief plan for cities that were cash-strapped and laying off police and firefighters — it was the Republicans who objected to it,” he said referencing a small part of a massive funding package that would have partially funded law enforcement officers.

Peter Doocy brought the remarks up, referencing “Something one of the advisers said this weekend … ‘Republicans defunded the police by not supporting the American Rescue Plan,’” Doocy noted. “But how is it that that is an argument to be made when the president never mentioned needing money for police to stop a crime wave when he was selling the American Rescue Plan?”

The whistle blew, the flag fell, the starting gun fired, and the mental gymnastics began:

“Well, the President did mention that the American Rescue Plan, they’ll — the state and local funding, something that was supported by the President, a lot of Democrats who supported and voted for the bill, could help ensure local cops were kept on the beat in communities across the country,” Psaki said. “As you know, it didn’t receive a single Republican vote. That funding has been used to keep cops on the beat.”

That wasn’t a statement Doocy was ready to let go without a response, so he noted that “at the time, that was sold as, ‘These local police departments might have a pandemic-related budget shortfall,’ not, ‘We need to keep cops on the beat because there’s crime wave.’”

The condescension continued, however, as Psaki was backed into a corner. She went on to say that “I think that any local department would argue that keeping cops on the beat to keep communities safe when they had to, because of budget shortfalls, fire police is something that helps them address crime in their local communities,” Psaki said.