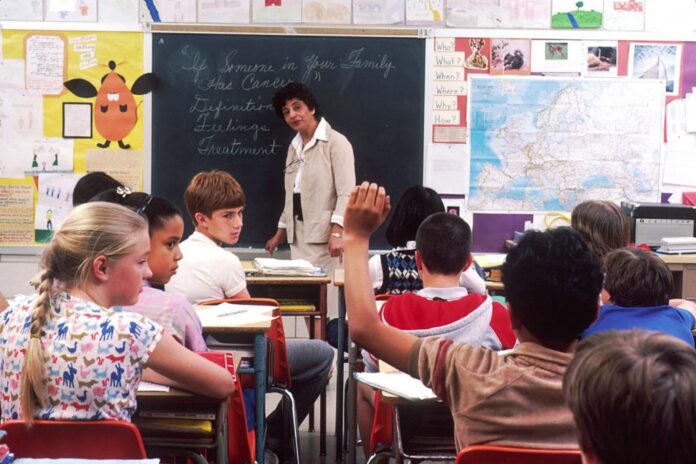 Woke theology is by far the most damaging and destructive force in the American educational system. The Democratic Party wants to rewrite American history and teach people that the country’s history was based on the preservation of slavery instead of the ideology of all people are created equal in the sight of God. And yet another school district in Illinois falls victim to the lies and seeks to force students to learn the lies.

But one teacher is working in the Evanston/Skokie School District that is fighting for the students. She is fighting back because the new material teaches that discrimination is acceptable and seeks to separate people into color groups.

Stacy Delmar is the teacher of the year as she fights for what is right in the educational system. She is suing because the school district effectively “conditioning individuals to see each other’s skin color first and foremost, then pitting different racial groups against each other.”

The lousy racist liberals are undoing everything that the civil rights movement fought for decades ago.

Delmar states that the school district violates federal law by teaching kids to be racist and separate themselves by color. And when the teachers were trained in the new material, they were purposely segregated by color. They might also go back to buses for black people and white people because that is where the woke material is taking America.

The woke theology teaches kids that white people are the racists and privileged in America. The material itself is racist as it seeks to put another person of color down.

The lawyers working for the teacher stated that “For years now, race-based programming has overtaken District 65 in the name of racial ‘equity.’ What seems like a relatively benign cause—also euphemistically called ‘social justice,’ ‘diversity and inclusion,’ ‘critical race theory,’ and ‘culturally responsive teaching.’”

Woke is a liberal method of pushing racism. They want to keep the conflict alive because it gives them a reason to hide their liberal agenda and their methods of destroying America.

The lawyers noted that woke “is actually code-speak for a much bigger and more dangerous picture: the practice of conditioning individuals to see each other’s skin color first and foremost, then pitting different racial group against each other.”

Every teacher is required to take anti-racist training while at the same time they are to teach that racism is ok against white people. They are told that they need to try and be less white. You might also hand them a can of spray paint and tell them to paint themselves because the color of a person’s skin is out of their control.

Delmar points out that the school may want to create an opportunity for all people to be equal, but they put it down and create a hostile workplace for white people. The school district has even admitted that what they are doing is putting everyone through a destructive experience.

The demonic liberals want to divide students racially. They need the next generation to look at each other with contempt so they can continue to push the age-old story that America is a racial nation. They want the world to believe that America is evil and will not tolerate equality even though all legal migrants are treated as equals and let into the country to live the American dream.

Every few years, the Democrats come up with some new way of teaching their hateful doctrine of racism. The courts will eventually brand woke and CRT as anti-American and dangerous. But until that time, people must continue to fight against it.

People like Delmar are paving the way to a better America. But the liberals are working in the shadows to keep pushing their poisonous ideas into the next generation of adults. It is time for state leaders to stand up and kick the liberal poison to the trash. Ron DeSantis did it for Florida, and the students are praising him for keeping education free of racism and other dangerous teachings that come from the Democratic Party.