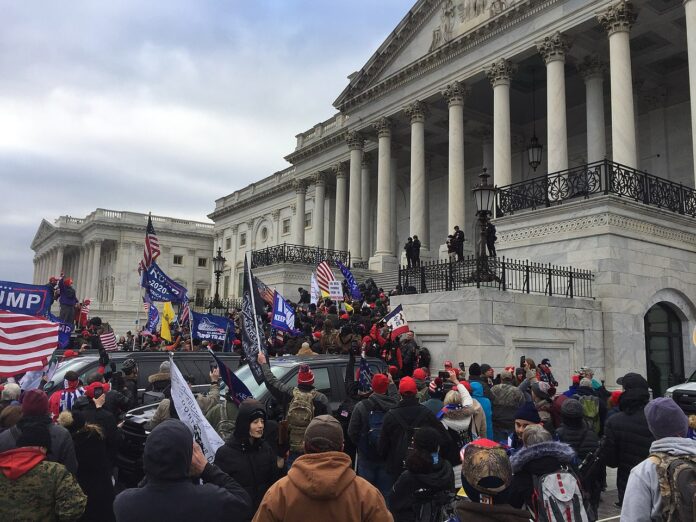 If you happened to be strolling the White House grounds on January 6, or perhaps you took a scenic tour of the historic buildings inside, you might not want to breathe too easily yet. The Feds may have you locked into their radar, and by now they may even know where you live. But if they don’t, not to worry, they’ll get around to you. A lot of who they nab first has to do with the person’s known level of involvement.

Does it really matter all that much at this point? What happened is over and done with and it was a one-time deal. Can’t a person get upset about a faulty election? Well. To our current government in charge, it does matter. These turncoats are their opposition. These folks want their America back and the Biden administration will in no way, shape, or fashion tolerate anything of the such.

The initial arrests were easy-peasy. The Feds rounded up the intruders who had smiled for the security cameras or who had profusely bragged of their involvement on social media. It was almost too easy due to the pics and video footage some of the protestors had openly shared. Others were identified via news media footage and yet others were turned in by liberal-minded ex-friends who knew they had been there on that day, even if only as a peaceful spectator in a show of support.

But since six months have slipped by the task of finding people is becoming increasingly more difficult. Out of the initial batch of arrestees, 500 of them either pleaded guilty or no contest. But 500 is peanuts. The Justice Departments’ files are heavily laden with the names of those yet to hear from them, and as the days go by, the files are becoming thicker.

The department is still prioritizing their arrests. A major roadblock has been in finding out who planted the pipe bombs discovered outside the headquarters of both the Republican and the Democrat national committees. Thus far they haven’t a single clue so it’s going to tie them up for a while.

They’ve also prioritized the arrests of anyone seen in video footage, on pics, or even accused of attacking police officers. Next in line is anyone who might have bad-mouthed a journalist. Bad mouthing isn’t illegal unless you were there on the 6th, in which case the rules have been conveniently changed.

Liberal snitches nationwide have made the FBI’s methods wildly successful but they still have a very long way to go. Receiving names has been the easy part. With each new name comes an internal investigation, an interview, search warrants, arrest warrants if required, and a huge spool of endless red tape.

Leaving absolutely no shadow of a doubt the FBI must prove the persons’ identity and their involvement on the 6th. They’ve encountered a major problem with running hordes of pics of people who have had no previous involvement with the law. Because of this, their criminal identifying system no information on them. They were simply pissed-off patriots expressing their anger. That’s it. Otherwise, they’re everyday law-abiding citizens who care about their country.

Frank Montoya Jr who ran the FBI’s Seattle and Honolulu offices prior to his retirement said, “Most of these people never showed up on the radar screen before. You watch the movies and a name comes up on the radar screen and they know all the aliases and the last place he ate dinner, all with a click of a button. Unfortunately, that’s not how it is in reality.”

Liberals around the country have taken up the voluntary title of what the FBI calls a “sedition hunter.” These armchair detectives use various social media sources to pour through user’s photographs hoping to find a match. The arduous task has actually provided some results. Not many. But nonetheless, some.

So now that you know all of this, and if you were in D.C. on January 6, you also now know that “big brother Biden” might already have an eye on you. Needless to say, watch your step. What’s hoping to be achieved by this manhunt is anyone’s guess, but just knowing you’re being hunted down like a rabid rabbit is disturbing enough.