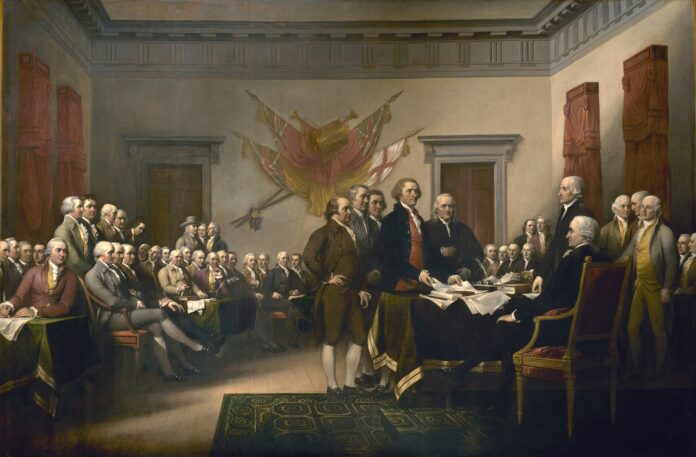 We can’t change who they are. They’re a part of our history.

No one is perfect.

In the 1700s, many were slave owners. It isn’t that they believed that they should have ownership of another human being. It is simply what was done back then.

We know it’s wrong today because we’ve had over 200 years to learn from past mistakes. Had the founding fathers been able to see into the future, they would have been able to make better decisions. But they didn’t have that kind of futuristic insight. Therefore, they cannot be punished.

Each name in our history holds important significance.

George Washington was the first president of the United States. Thomas Jefferson helped to pen the Declaration of Independence. John Adams was the second U.S. president and also a leader in the American Revolution.

The left wants to re-write our history by attacking the leaders who made America the most special country ever. It’s our duty to teach our kids the truth.

Even beyond the founding fathers, there are many others who helped to shape the country.

If it were up to the left, they’d re-write history.

How do you even go about doing that? Our history is our history. Whether it is “too white” or “too male” for some groups to appreciate, the reality is that there were white men responsible for shaping the country – and children in school deserve to understand the country’s history.

MSNBC host Joy Reid, known for her uber-liberal views, referred to Mount Rushmore as “the stone idol to presidential colonizers.”

Seriously? Those who shaped our country should be preserved in stone. It is a way to share the history with everyone who sees it. Meanwhile, yes, they’re colonizers. Without the influence of those presidents, who knows where we would be. The U.S. may not even exist.

Governor Kristi Noem of South Dakota, a Republican, criticized Reid. There’s been a constant feud between the two, mainly because Noem has been a supporter of Trump. Noem wrote on Twitter to say that the left is looking to rewrite the country’s history “by attacking the leaders who made America the most special country ever.” She followed it up by reminding everyone that it’s our duty to educate children on the truth.

There’s no way to get around our history. When we celebrate the Fourth of July at Mount Rushmore, it’s not glorifying white supremacy. Although the Democratic National Committee actually said that, Noem fought back to say that they were doing a “grave disservice” to the country.

Imagine that. A carving in stone that pays homage to our founding fathers is now a way to glorify white supremacy. No. How about it was a way to celebrate our roots as a country?

There are a lot of people in history who have done great things. We can’t pick and choose everything about who they are and what they have done to determine if specific actions are worthy of greatness or not. To do so would mean that we’d find fault with every important character in history, regardless of color, religion, race, or gender.

Reid isn’t exactly a favorite of the right or the left. She’s made countless inflammatory statements towards groups. A pro-LGBT group has even rescinded an award offered to Reid due to homophobic blog posts.

Reid isn’t helping America. The reality is that America needs to know about our history. And celebrating our history doesn’t mean that we have to like it. We just have to have pride in our history and continue to teach it.