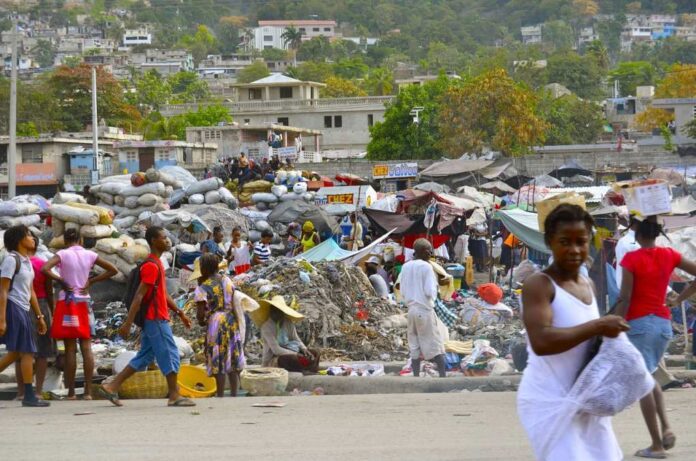 Voodoo and black magic have long been the name of the game in Haiti where dolls regularly get stuck with pins and the evilest of spells can be cast upon one’s enemies for the right price. As if the tiny impoverished country is stuck in a non-evolving time warp, Haitians have rejected the comforts and amenities of modern life in favor of their old tried and not-so-true past. And as one would rightfully expect of the stagnant so-called nation, chaos and danger abound around every corner.

By all Western standards, life in Haiti is dangerous, unhealthy, and to be avoided at all costs. The exception would be the countless well-meaning U.S. missionaries who hope to capture a few heathens but generally return home with empty stringers. You can’t save ’em all…

Never say never. If it’s even possible for Voodoo-Land to get any worse, it just did. Haiti’s head honcho, whose name you may not even know, President Jovenel Moïsef, just took a fatal bullet to the head in a gun battle that also left four of the assailants dead. Two more were detained while yet others escaped in the predawn raid on Moise’s personal residence.

The president’s wife, Martine Moise, has thus far survived but is still listed in critical condition at the medical facility in Miami where she was airlifted to. There are no medical facilities in Haiti capable of caring for her extensive wounds.

Officials in Haiti have sworn a vendetta against the remaining suspects. “The pursuit of the mercenaries continues. Their fate is fixed: They will fall in the fighting or will be arrested,” said Léon Charles, director of Haiti’s National Police.

Details on those killed or captured have not been provided, nor has there been a hint concerning their motive, but keep reading and we’ll tell you what it was. Officials did say the attack was not random. This was “a highly trained and heavily armed group.” They also indicated that the group spoke either English or Spanish but would not clarify.

Making it clear that it wasn’t any of them, Haiti’s main opposition parties immediately condemned the attack, as did the international community at large.

Enlisting the assistance of the police and the military, Prime Minister Claude Joseph has temporarily assumed the helm. Joseph immediately called for a two-week state-of-emergency as a stunned nation wonders what’s next.

Haiti already wins the grand prize for having the highest poverty and crime rate in the Western Hemisphere. This coupled with consistent political instability has the rest of the world also wondering. Is there anything left to salvage?

Food and fuel are fast becoming rare commodities and inflation is wreaking havoc on the citizens whose average income is a shameful $2 an hour. Bets are being taken as to how long it’ll take this third-world country to enter not-of-this-world status as they crash and burn for the final time. Not should, but when this happens, Haiti will become a no-name lawless and bloody wasteland.

The country still has yet to recover from Hurricane Matthew’s devastating punch in 2016, or from the major earthquake that all but leveled the place in 2010. When you add a dark history of dictators and political confusion to the boiling cauldron you end up with a fatal concoction.

Marlene Bastien, the executive director of a group that works with families in Miami’s Little Haiti area said, “there is this void now, and they are scared about what will happen to their loved ones,” who have not as yet immigrated.

Bastien, expressing the feelings of the Family Action Network Movement, said the U.S. needs to do more. She specifically called on Joe Biden to take a much more active role even though this isn’t our ballgame and they did it to themselves. Besides, who in Haiti would monitor any food or supplies we would send? Biden certainly isn’t stupid enough to send our troops rushing in to control the situation. Is he?

Bastien also wants Haitian citizens living worldwide to participate in salvaging what’s left before they have no home to return to. “No more band-aids. The Haitian people have been crying and suffering for too long.”

Well. Haiti is going to continue suffering and here’s why. The situation has been far direr in times past and Moise’s assassination was well planned despite what officials would have the world believe. You see, even with Prime Minister Joseph being fairly well-liked, he and Moise didn’t see eye to eye so Moise replaced him with his buddy, Ariel Henry.

The day following Henry’s appointment, Moise was killed. The jigsaw puzzle is now on your table to finish piecing together. Have you finished it yet? Yeah. That was an easy one. Still, if Joseph and the boys can’t finish pulling off what for all practical purposes appears to be yet another Haitian coup attempt, and it’s kinda looking like they might not be able to…See ‘ya…Wouldn’t want to be ‘ya…

If they do get away with it, life will return to its horrible unsustainable self, and they’ll probably go down the tubes anyway. So yeah. It sucks to be them.