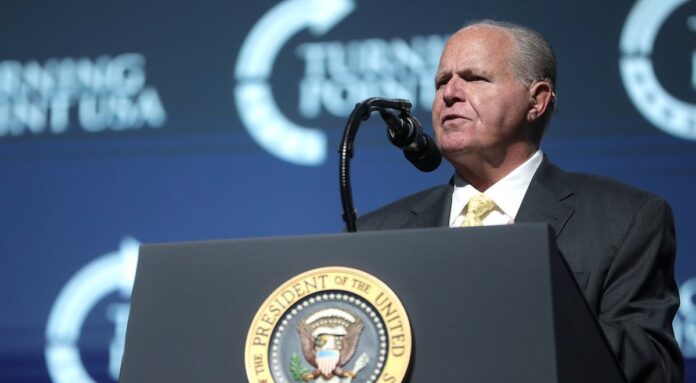 Rush Limbaugh was known as an American icon. He was a beloved hero by many people who loved how he exposed the hypocrisy of the liberal left. They could not get away with anything with him watching over their every move. He was the one voice that they could not silence or control with their threatening ways.

The nation has lost a national treasure. Conservatives everywhere are mourning the loss. They are paying respects as one should at death. One would think that liberals would do so out of respect. But when they do not value life, there is no telling what they will do when a person they see as an enemy passes away.

Limbaugh defined the political landscape and brought new meaning to what it was to be a conservative. Every time he spoke, the liberal media would quote him wrong on purpose just to try and smear his good name. They feared the icon.

He dominated all the media sources. He was the leader of the battles that would rage on the front lines. But know that his presence is missed. The liberals are showing their true colors. Even from the grave, Rush Limbaugh is exposing the Democrats as the demons they are.

The liberal media did not take long to show their venomous fangs when the word was released that he passed away. Many of their words are right out of the crypt book of nastiness.

The Democratic Party is acting like it’s celebration time now that a man has died.

The idea that you say artifically nice things about people after they die is weird. I’ve never understood the logic of it. Rush Limbaugh was a terrible person while he was alive. He made a living by attacking the powerless. His death does not in anyway change or redeem that.

Jared Yates Sexton did not take long to bash the iconic figure.

He lashed out and stated that “Rush Limbaugh was one of the most harmful and poisonous people in the modern United States of America. His pursuit of wealth and power hurt untold numbers of people and wrought incalculable damage to politics as a public good, society as a whole, and the planet itself.”

One would expect that the call to arms could be silenced for a few days to give honor to a life that slipped away. But the liberals, his life is better off extinguished because now he cannot expose them for the evil thugs that they are proving themselves to be.

There was not a liberal around that could ever compete with the intellect and knowledge of Rush Limbaugh. Every time one of them called in to harass the man, the call ended with the liberal looking like an infant because they could say nothing to refute what they were being told.

The liberal left’s lunacy focused heavily on the man even after he passed away. The constant attacks and mocking are that he received from them only served to prove his point about them.

getting a boner over rush’s death to own the cons pic.twitter.com/2PQlExCSOk

They hated him the most because he could slam with the truth and leave them exposed as frauds and hypocrites. The left could never get away with anything, with Limbaugh looking over their shoulders.

The liberals rejoiced when the news came out.

Christopher Mathias would lash out in joy, stating that “Rush Limbaugh was a bigot and a misogynist who saturated America’s airwaves with cruel lies and conspiracy theories for decades, transforming the GOP in the process.”

Rush Limbaugh was a bigot and a misogynist who saturated America’s airwaves with cruel lies and conspiracy theories for decades, transforming the GOP in the process.

And then there was lopsided Jim Acosta that used the icon’s passing as a way of showing his hatred for both Limbaugh and Trump.

Fox News had Trump on but didn’t ask him about the insurrection he caused.

He would say, “Fox News had Trump on but didn’t ask him about the insurrection he caused.” That was not the point of the interview. Acosta and the rest of his fellow haters just cannot get enough of the passing and Trump-bashing.

Louis Virtel would hate his family for telling him to listen to Limbaugh.

Once I learned my aunt listened to Rush Limbaugh, I knew never to speak to that aunt again. Thanks, Rush!

He would state that “Once I learned my aunt listened to Rush Limbaugh, I knew never to speak to that aunt again. Thanks, Rush!.”

The Democrats’ pettiness and their brainwashed followers are coming out in their constant attacks against the heroes of the conservative party. In the decades to come, his name will live on as a source of truth and an inspiration to continue to fight against the horrible evils coming from the Democratic Party.

Frankly, Rush would probably be laughing his ass off at all the ghoulish posts about his death today. He certainly wouldn’t have expected anything less from a crowd that doesn’t have much lower to stoop.