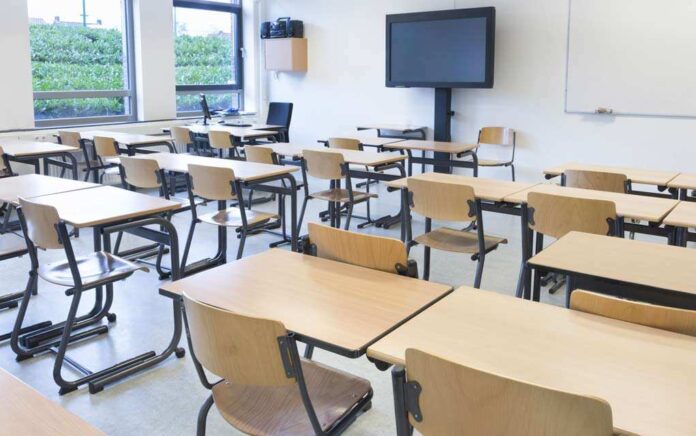 The National Education Association is taking a page out of the Democrat’s playbook by making it seem that they are not teaching things in classrooms around the country. The latest topic at their annual meeting was the Critical Race Theory. It was on the list of nonsensical items that liberals love to talk about, except for a subtle twist to the discussion.

The NEA discussed that the CRT was not being taught in schools. This statement flies in the face of lawsuits filed against local school boards because CRT is being taught in the classrooms. The point they are hoping to make is that if they can remove any trace of the teaching from the public’s eye, they will teach undercover their lies.

This lie will allow students to prey upon the innocent minds filling their classrooms every year. They will be able to pick on them and make them feel stupid for being born a specific color.

The NEA attempt when Critical Race Theory was adopted to educate people on what it was about. The problem was that they did not know what it was about before they tried to pass it off as a truthful package of information. Facts are facts and what they presented was nothing but lies and made-up stories.

The National Education Association had posted its official definition of CRT on their website, but they removed it because they want to keep the intent a secret. By not posting what the theory is all about, they can make any changes they want without explaining their motives to the public. The public school system under Biden has become a Nazi training facility.

Their document also spelled out that they join forces with Black Lives Matter terrorists. And the country remembers what it was like when BLM was parading through the streets, killing and beating people of all color. They intended to loot and destroy everything they could get their hands on.

The document was meant to educate the NEA that was ignorant conservatives. The Republicans saw right through the lies and determined that this is just another version of the material that Democrats use to brainwash kids with. But they have sadly misjudged conservatives because they are better educated and can use the knowledge they have wisely.

The removal of the document allows the liberals to change things in their description of CRT to match up with what conservatives are telling people is wrong. They would hope to trim the truth enough to get people back off and stop criticizing their material.

The liberals hate the fact that the conservatives are not accepting of their dangerous doctrine. Instead of the correct version of history, they need to change it to fit their version of America’s future. And to do that, they must brand Republicans as extremists and let Biden’s police take them to concentration camps around the country.

But they cannot just make millions of people disappear without first making it legal. They need to reduce that number by brainwashing the kids, so they turn on their parents and are more willing to betray them to the police.

Critical Race Theory is the baby of the NEA. The association has turned into a political force of liberals seeking to corrupt the minds of young people. They hold it near and dear to their blackened hearts. The removal of the document puts the public in the dark about what they are doing to kids.

Democrats will stop at nothing to achieve their goal of destroying America. They know that the way to get the job done is by taking kids and brainwashing them with dangerous ideas. They are programming the next generation of voters and politicians.

The only roadblock in their way is conservatives. They cannot wage battle hard enough against Republicans because they are too powerful for them. They cannot debate them without getting frustrated and violent. And the sad part for them is that they cannot win an election without massively cheating and manipulating results. That was the only way they could get Joe Biden into office.