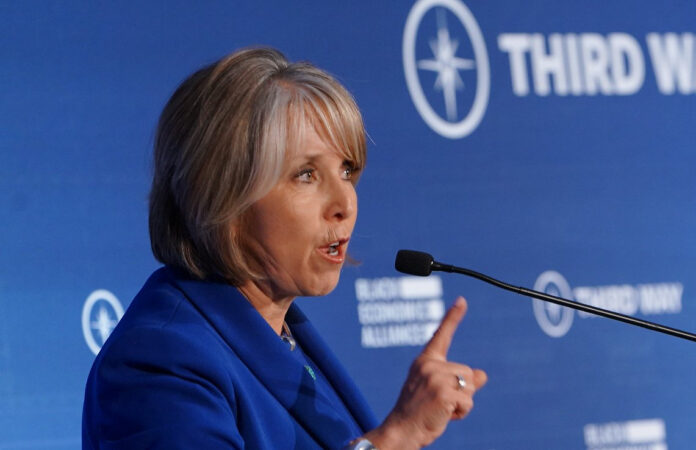 New Mexico Governor Michelle Lujan Grisham is a Democrat, of course. As it turns out, she’s made quite the mess for herself and we have absolutely no sympathy. Like many Democrat governors, she likes to dip into taxpayer funds to pay for her own expenses. Alcohol, groceries, top tier beef, you name it, she bought it.

A report has been released detailing purchases that were made with the expense fund and the evidence is damning. In addition to spending taxpayer funds, Grisham is also urging her state’s residents to avoid mixing households. She’s so worried about the spread of the coronavirus but she’s still having in person meetings.

$13,500 in taxpayer funds were used for various expenses that have nothing to do with gubernatorial duties. The governor’s Cabinet members and staffers used the money to treat themselves to fine dinners while they sat around having meaningless meetings. This is not information that we are pulling from thin air, as it has been confirmed by governor spokesman Tripp Stelnicki.

As anyone would expect, the Republicans of this state were not about to let these reports pass without any sort of acknowledgement. They are saying the same things that we are all thinking, that is for sure. Fox News was given the chance to speak with some of these leaders recently and their comments are telling.

“I didn’t realize the governor was so underpaid that she has to use discretionary money for things that she should be paying for herself,” state House Minority Whip Rod Montoya, a Republican, told the New Mexican. “Legislators are all up here doing our job, and we’re doing it on per diem.”

“It’s not what tax dollars ought to be spent for,” New Mexico House Minority Leader Jim Townsend of Artesia told the paper. “In a time when people are hurting all over the state, using their tax dollars to buy Wagyu beef has got to be a little bit disenchanting to many people.

“I think it’s just more of indication of the problem that we have had, and the governor has had, connecting with people,” he added.

How did the governor decide to handle this controversy? She held a virtual news conference Friday and her assistant was swiftly tossed under the bus. You see, a “woman who works here [who] is a rock star” is responsible. It’s a pretty clever way to make sure that the knife in the back is not too painful. Her spokesman also claims that the bottles of alcohol remain unopened.

As a basic gesture, it would be nice if they simply returned all of the booze that the “rock star” was responsible for purchasing. “I don’t want New Mexicans to feel like I don’t take seriously their hardship,” said Grisham. That does not track. Someone who takes hardship seriously would never take taxpayer money and blow it on fancy booze but we digress. This is what the Democrats think of you.

Biden had actually placed Grisham on his short list of vice presidential candidates so at least we dodged a bullet there. It’s not like Harris is much better but Grisham could have been a whole lot worse. Grisham thinks it is okay to disrupt all of the other businesses in the state as long as she can still conduct her own.

Virtual staff meetings were too much to ask. The people of New Mexico are being asked to make a huge sacrifice but their governor is not willing to make any of her own. It’s sad to watch but par for the course for the Democrats.