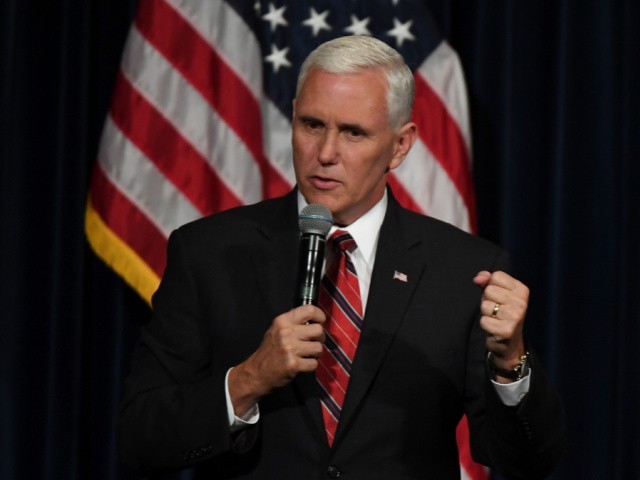 Pence had said during his speech that “the debate is settled.” He wanted to emphasize that the Trump-Pence administration had proven to the world, and now “millions of Americans acknowledge,” that “the Chinese regime harbors adversarial intentions toward the United States and our allies.” Pence added, in the “wake of a devastating worldwide pandemic compounded by Beijing’s lack of transparency,” the American people now know that “Chinese leaders cannot be trusted.”

Additionally, he said millions of Americans can see today that the Chinese Communist Party (CCP) does not want to just be a part of the “community of economically developed nations,” but they intend to “sit atop a new global order created in its own image.” Pence said their goal would be “a world in which freedom is constrained, but Beijing power is not.”

Despite former President Donald Trump and Pence’s attempt to awaken the world and the American people, he said the Biden-Harris administration is already trying to turn back the clock on the American people. He said the “the Biden-Harris administration is already rolling over to communist China.” Under President Joe Biden, the United States has already rejoined the Paris Climate Accord, which he said allows “China to pollute with impunity.”

The United States also rejoined the “Chinese-controlled World Health Organization without demanding a single concession in the wake of failures throughout the pandemic,” and terminated the Trump administration’s investigation into the origins of the Chinese coronavirus pandemic. However, Pence noted the Biden administration soon reversed their course on an investigation into coronavirus origins.

Pence strongly said that “America cannot afford to stand still in writing our relationship with China.” He said it is important for the “Biden administration to keep up the pressure, pick up the pace, and lead America forward because China is pursuing its global ambitions more aggressively than ever before.”

Pence also mentioned that “China senses weakness in this new administration.” Pence said the Chinese views were echoed during the first face-to-face meeting the Biden administration had with the Chinese diplomats when they used an aggressive tone. He describes the meeting as lecturing the Americans “on the shortcomings of our democracy, the foolishness of American values, and the so-called superiority of China’s authoritarian system.”

Pence said, “First, the United States must demand that China come clean about the origins of the coronavirus.” He said there is evidence out there that strongly suggests that coronavirus “leaked” out of a Chinese lab. Pence explained that after “four million deaths around the world and a year of unspeakable hardship,” everyone deserves to know what the CCP knew and when they knew it.

The former vice president added that “under no circumstance should the United States allow public or private funding of scientific laboratories in communist China, especially those involved in Gain of Function Research today.”

Second, he said, America will “need to ensure that America is fully prepared for the future pandemic that may strike of the world.” He noted it would be unlike the coronavirus but said, “if history is a guide, it could likely emerge from China as well.”

Pence said in the height of the pandemic, the Trump administration had “ordered federal agencies to purchase certain prescription drugs exclusively from American factories to bring vital medical supply chains back to the United States,” and Pence says Biden should continue that and do the same thing.

Third, Pence said, Biden “should accelerate efforts to decouple the American economy from China in industries that are essential to the American people in our national security.” Pence gave examples of cutting off all farm subsidies for land owned by foreign nationals because, according to Pence, Chinese investors currently own nearly 200,000 acres of prime American farmland.

Pence also said Chinese investments should be prohibited in critical parts of the U.S. infrastructure, like pipelines and power plants. While the U.S. tries to decouple from China, the U.S. should use the time to strengthen ties with Taiwan and create a trade agreement.

Pence said while Biden is taking the time to cut the defense spending in his proposed budget, China has been pumping money into theirs. He said China’s defense spending has gone up by “almost 600 percent in the last two decades.” Pence mentioned the Chinese are developing new space technology and have even launched their own space station.

“China must never be allowed to build a military base in Latin America or anywhere in the western hemisphere,” Pence said sternly.

Fifth, the former vice president said, “To protect American intellectual property and National Security, President Biden should immediately prohibit the issuance of H1B visas to Chinese nationals employed at US technology companies.” Pence wanted to explain his reasoning by saying, “This is not because we don’t trust Chinese visa holders. It’s because we don’t trust China’s communist government.”

He said America knows “China often coerces its own citizens to participate in industrial spent forces them to hand over trade secrets against their will.” In addition to this, Pence said that Confucius Institute centers should be banned from colleges across the country.

Lastly, he said, “Biden should make a clear and unequivocally demand that the 2022 Winter Olympics be moved from Beijing unless China comes clean on the origins of COVID-19 and immediately end persecution of the Uyghur people.” Pence explained the Olympic games “should only take place in countries that respect fundamental human rights and the well-being of mankind.”

Pence said he believes these are the steps that need to be taken in order to face the CCP because he says it is important to reflect on China possibly being more lethal to the U.S. than Russia was in the Cold War.