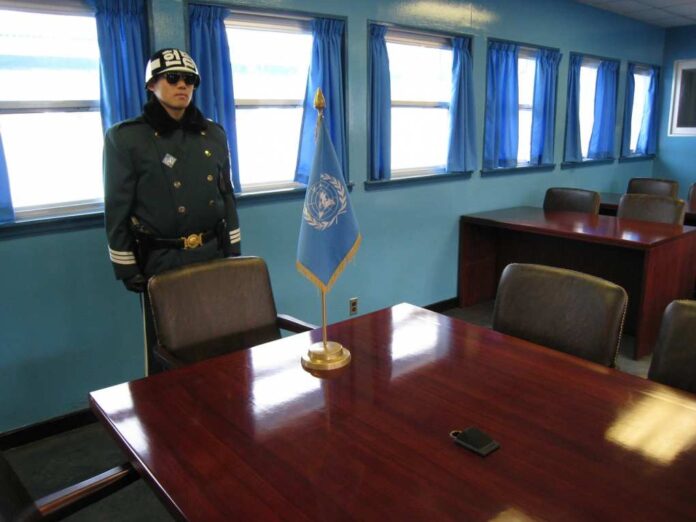 As thousands of Cubans take to the streets in hopes of toppling their Communist government, yet another oppressive regime in serious trouble has appeared on the horizon. This particular nation has unpleasant ways of dealing with defectors so it isn’t due to its ragged residents kicking up dust. This one can all be pinned on their notorious yet oddly revered chubster of a leader, Kim Jong Un.

Shadows surround what Jong Un has dubbed as the “great crisis.” Nobody knows for certain what this means, but based on his recent actions, all indicators say the tiny hermit nation is up the proverbial financial creek. Jong Un’s been spending all of his countries money, which is technically his, on fun stuff like launching rockets into the sea. He’s blown his wad so to speak.

As one might expect, he claims no responsibility for the dried-up well so he’s coming down hard on those he’s portraying to have had the biggest hands in the mysterious crisis. More or less a slap on the hand by Jong Uns standards of punishment, he began trimming the duck fat by demoting his top military official and not replacing him. No telling what he saved on that one.

Next, he plans on working his way down the ranks and doing some weeding here and there. Some of these soon-to-be pink slip recipients are pulling in top dollar, or ‘won’ if you will. Their positions won’t be replaced either. Some will get lucky and just get demoted but the majority will get a boot up their puckered butt.

But as always, there’s more behind this than what meets the initial eye. North Korea’s financial woes are true as stated, but it’s also a diversion attempt to cover up its enormous and continuing death rate from COVID-19.

Former Pentagon intelligence analyst, Bruce Bechtol, who has conducted numerous studies surrounding North Korea’s leadership, summed up Jong Uns blame game by saying it’s “facing major economic and health issues because of COVID. They have done their best to hide it… [but] the country is in big trouble right now.”

Needing to make a firm public display of his supposed intolerance, Bechtol said, “having already reshuffled positions, the next big step would be an uptick in executions in order to assign blame.” Executions. Yeah.

The countries military is catching blame for not properly distributing the food supplies they never actually had to the nation’s starving skeletal-looking populace, and the top-paid brass needs to pay for the atrocity. This is cool with the populace since their god-like leader has only his loyal subject’s best interests at heart, and these are bad men.

Formerly with Yale Global, analyst Shim Jae-hoon gave his researched viewpoint. “North Korea is in economic trouble from sanctions plus China’s failure to provide a big food shipment.” He then said the “food shortage is turning acute now. Kim must guard his dwindling hard currency lest he runs out of emergency funds.”

Jiro Ishimaru with the Osaka, Japan-based Asia Press wrote, “People are dying for lack of food and medicine. Since the beginning of June, the lives of the North Korean people have been deteriorating.”

Ishimaru claims the real blame for the unidentified crises falls on Kim Jong Un himself because he “closed the borders to prevent the spread of the coronavirus, preventing people from coming in and out of the country.” Via his underground contacts, Ishimaru received much of his information from a Chinese cellphone that had been smuggled across the border. The punishment for getting caught with a Chinese cell phone in North Korea can be as severe as death.

South Korea’s largest newspaper, Chosun Ilbo, stated how Kim Jong Un “seems to have resumed a reign of terror by purging scores of officials over his own disastrous failings amid a growing food shortage.” Ya gotta make things look legit and what better way than to set a few heads rolling. Plus you make the point to never cross you even though none of these guys really did. Win/win. Honor their sacrifices.

North Korea’s only paper, the party owned Rodong Sinm, gave a different perspective. It sternly warned officials against being “losers of the revolution.” Whatever revolution that might be. The paper said “mistakes made in the process are forgivable” but, “causing critical harm to our party, country and people due to irresponsibility and negligence of duty is never acceptable.”

Is North Korea on the verge of crashing and burning like most of Kim Jong Uns rockets? Will they, or can they, survive this financial crunch? Kim Jong Un is lying his ass off to save his own skin. But considering how dead bodies are rotting in streets, houses, and fields everywhere, will its brainwashed citizens at last snap out of their hypnotic trance should they discover the truth? One can only hope.