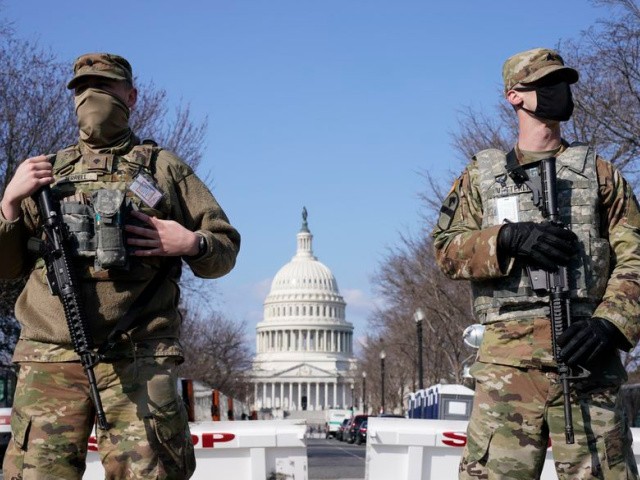 The USCP released a statement last week that said through a loan from the Department of Defense (DOD), it will have access to “state-of-the-art campus surveillance technology, which will enhance the ability to detect and monitor threat activity.”

The surveillance technology systems will provide “high-definition surveillance video, including night vision,” to identify “emerging threats,” according to a DOD press release.

The June 2 release said Defense Secretary Lloyd Austin had approved a request from the USCP for surveillance systems to improve U.S. Capitol security. It said:

Under this arrangement, the DoD will provide eight Persistent Surveillance Systems Ground – Medium (PSSG-M) units, on a reimbursable basis, for a period of one year. The Army will install the units and will train USCP personnel or authorized contractors to operate the systems. Except for required maintenance of the systems, no DoD personnel will operate the PSSG-M units.

An April 2, 2015, article featured on the Army’s Program Executive Office (PEO) for Intelligence Electronic Warfare & Sensors (IEW&S) website described a similarly named system, the Persistent Ground Surveillance Systems (PGSS). According to the article, the PGSS can detect small arms fire and other activity “in support of rapid reaction security forces.” It went on:

The PGSS provides day/night, 360-degree detection, surveillance, and target marking capability with an ability to stay aloft for up to 30 days. It is capable of detecting hostile fire, providing target coordinates to appropriate command and control centers, fire control centers, and is capable of marking ground targets for rapid reaction forces for engagement.

It is not clear whether the PSSG-M unit would be mounted on an aerostat, which resembles a blimp, as in Iraq and Afghanistan, allowing the military to collect reams of data.

According to the Washington Times, the data gathered from the systems could be used to develop “pattern of life” analyses on suspected enemy combatants or intelligence targets in war zones.

It is not clear who would store the Capitol surveillance data or where the data would go — which could present privacy and civil liberties concerns.

Indeed, a federal appeals court ruled last month that the Baltimore Police Department’s use of persistent surveillance technology was unconstitutional and violated the Fourth Amendment protection against unreasonable search and seizure, according to the Times.

William Owen from the Surveillance Technology Oversight Project told the newspaper that the new technology is an alarming advance of police surveillance.

“These so-called improvements that the Capitol Police have implemented after the insurrection represent an expansion of police power and surveillance that STOP cautioned against in January,” he told the outlet.

The USCP’s Civil Disturbance Unit has also increased its training with the National Guard, and is also in the process of opening Regional Field Offices in California and Florida, “with additional regions in the near future to investigate threats to Members of Congress.”

It is also increasing intelligence-sharing with local and federal law enforcement, as well as increased “partnership” within the intelligence community.

John Robb, blogger on Global Guerillas and podcast host, tweeted Wednesday that the USCP’s acquisition of the systems “sounds like the beginnings of a Praetorian Guard.” He tweeted: