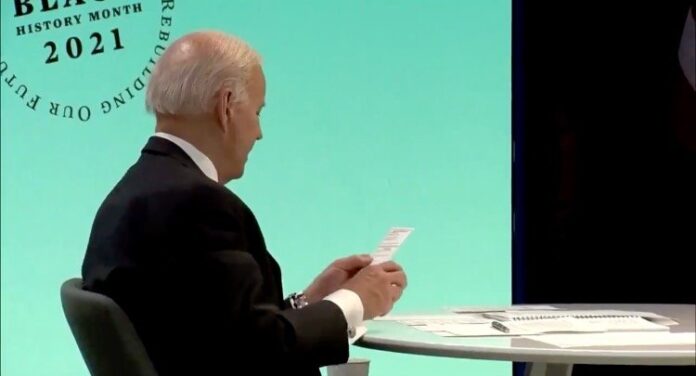 Biden has enjoyed taking all kinds of cheap shots at President Trump since he was able to successfully swipe the election. The latest swipe took place during a remote White House that was held on behalf of essential workers who are black. White House domestic advisor Susan Rice co-hosted the event.

At one point during the ceremony, Biden made a very bizarre choice. He decided to pull out the “COVID card” that he apparently keeps with him at all times. Sleepy Joe was mumbling up a storm during the display, making us wonder if his mental acuity is dwindling even faster than expected.

The card contains information about the people who have been affected by the virus but we are not sure why Biden has to carry it everywhere with him. When it came time for him to offer remarks about the pandemic, he couldn’t even speak from the heart. He needed the card to tell him what to say.

Biden says he carries a card every day that has information about folks affected from…Covid pic.twitter.com/JbK9VHdQQC

This is one of the clearest signs of dementia that we have seen yet. He can no longer carry out his duties in the manner that is expected of him. We have seen cards like these in the past and they are usually given to patients who are struggling to remember basic information that once came easily to them.

Does Biden have Alzheimer’s or is he experiencing something even more severe? These are the questions that he is leaving himself open to by carrying on like this in public. You would think that a president with these types of mental concerns would think his actions through a bit more. He is not exactly inspiring confidence with stories like this one.

We can’t wait to see what happens if someone manages to slip their own card into his pocket. Maybe someone should write a message on his card about the importance of admitting that you have stolen an election. He would probably end up reading the whole thing before his brain actually caught up to what was being said.

It always tickles us to watch him speak publicly these days. While Biden was never the brightest crayon in the box, you can tell the difference between his older speeches and his newer ones. He’s lost a lot of his spark and it’s clear as day to see that he is not the same guy he once was. His defenders will always blame the stutter but that’s too easy of an explanation for us.

The man is going be in his 80s by the time this term is complete. Harris has to be licking her chops. This is exactly what she signed up for. All she has to do is wait for him to inevitably lose his mind and she will be in line to snag his seat. It’s not like this partnership makes very much sense otherwise. Harris is a cop in the eyes of many and Biden is looking to re-brand as the kind, gentle, woke fellow.

Biden should have been letting people that this is what they would be voting for. If he had led with this, his voters probably would not have been so quick to choose him. Instead of having a president who is capable of basic coherence on an everyday basis, we are stuck with a doddering fool who is clearly on his last legs. The countdown to President Harris is on and this may be over more quickly than we thought.

If anyone can watch what took place here and think that the nation is in good hands, we would like for you to pass us some of what you are smoking and drinking. When someone finally gets fed up with Biden’s nonsense and decides to pull a Ron Burgundy on him (please watch Anchorman if you have not already), we will be right there laughing. In the meantime, Kamala is sure to be monitoring him closely.