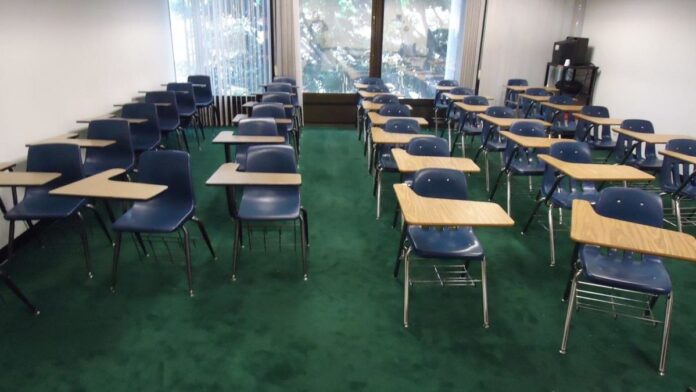 Why is it that the liberal states are the only ones stomping their feet? Why do they have issues with sending kids back into classrooms? A virtual setting isn’t getting the job done.

Kids are struggling in many ways. They’re struggling with their education, their socialization, and even their mental health.

It seems that Pete Snyder, the GOP candidate for governor in Virginia, gets it.

His plan to save the state’s economy involves reopening schools and saving small businesses.

The state is already recovering from coronavirus lockdowns. The final stage to recover is to open the schools – yet it seems that Dems aren’t willing to do that just yet.

In-person education is already happening around the country. And have you heard about major outbreaks? No. Between mask-wearing and social distancing, teachers and students are remaining relatively safe.

Oh, and with increased vaccines, COVID cases are dropping significantly.

It’s why Snyder is a shining light of hope for the state. He’s making restoring in-person learning a key component of his platform.

Northam isn’t winning any popularity contests from the parents of school-age children, either. He’s one of the reasons why schools have been teaching virtually in part or in full for close to a year. The claim is that the coronavirus poses too many risks to teachers – even though the CDC has said otherwise.

Snyder has made it clear that his plan is simple: open the schools. There’s no need for a plan beyond that. Before the pandemic, schools were open five days a week, every week, for in-class instruction. So, the reality is that the schools just have to be told to open.

#OpenOurSchools. It’s as simple as that. Our kids can’t wait any longer. Sign our petition today to tell Northam to open VA schools

The CDC has already said that it’s safe for schools to open. And the proof is being seen all over the country. Virginia just doesn’t want to risk it.

Meanwhile, kids are suffering because of not being in the classrooms.

Virginians are angry. They know that the economy can’t rebound entirely until the schools are open. After all, when kids are in school, parents have the ability to go back to work.

The Democratic leadership seems to be dragging their feet. They’re taking cues from California and New York, holding out their hands for more federal aid to serve as an incentive to open the schools.

There’s no need to play games with the education of today’s youth. There are plenty of ways to stay safe and provide in-class instruction. Wear a mask and teach the kids, already.

While the gubernatorial election won’t take place until November, Pete Snyder is trying to do something now. He’s pushing a petition to get Governor Northam to open up the schools right away. After all, waiting until November means another school year has been affected – and the kids simply can’t wait.

Snyder is definitely getting through to the voters who have kids in the public school systems. However, Republicans have been struggling to gain proper representation for a while. Having a Republican governor may be a long shot, but it may be the move that Virginians are ready to make to see a real difference across the state.

Currently, the state’s House and Senate majority go to the Dems. Combine that with a Democratic governor and the state is in shambles. It’s why they’re struggling to get their economy back on its feet and why in-class instruction isn’t happening five days a week yet.

Snyder has been clear that he’s looking to make a difference. He wants to provide solutions. He’s not a career politician but he is a businessman – and he knows what the state needs.

He’s promised to offer ingenuity and hustle. If there’s anything that Virginians need at this point, it’s that. The economy and small businesses may be saved while simultaneously providing a better education for students.