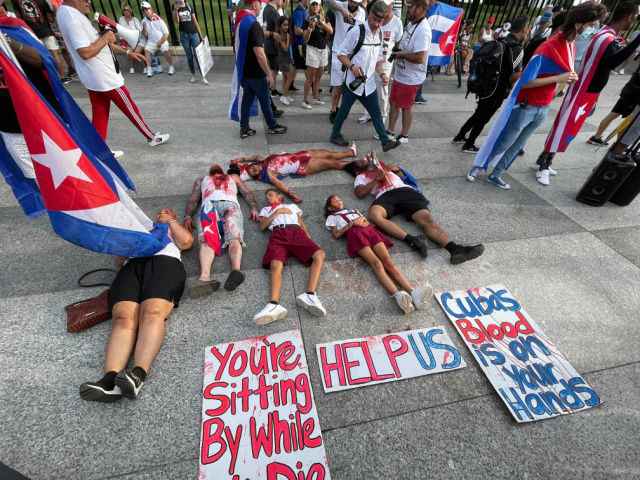 The uniforms are those used in Cuban schools; “Young Pioneers” are children who excel in communist indoctrination programs at a young age and receive advanced education and benefits, recognizable by their red kerchiefs. “Pioneer” programs are common in all communist countries.

As several hundred #SOSCuba protesters chanted “Freedom for Cuba” outside the gates of President Joe Biden’s home on Pennsylvania Avenue, a small group of protesters performed what is called a “die-in” to represent Cubans slain by Cuba’s brutal communist regime. As they laid still on the concrete, the protesters were surrounded by signs.

“You’re sitting by while we die,” one of the signs read. “Cuba’s blood is on your hands,” another read.

Protesters came from all over the country, including groups who bused from Miami to D.C., to participate in the demonstration. Protests have sparked in the U.S. and around the world since thousands of Cubans took to the streets in Cuba last Sunday and throughout the week, calling for the end of Fidel Castro’s 62-year dictatorship. While Castro himself died in 2016, the Castro family continues to control the island through its domination of the military.

The news of protests in Cuba spread via social media before the Cuban government shut down the island’s internet. More than 40 municipalities have participated so far, making it the largest anti-government protest on the island in decades.

Since protests in Cuba began, police have opened fire on crowds and beaten people in the streets. Independent media confirmed the arrests of at least 5,000 people so far, Breitbart News reported. Current figurehead President Miguel Diaz-Canel openly called on civilians to violently attack protesters on the streets in an “order of combat” issued late Sunday.

Breitbart News spoke with several protesters, many of whom came from Cuba directly or have family who did. The protesters warned of communism in the United States and spoke of atrocities in Cuba, including how young adults and teens are being forcefully taken from their homes by the government and made to fight against their own family and friends.

Demonstrators in D.C. cloaked themselves in Cuban and American flags and called on the Biden Administration to intervene in Cuba to put an end to the grave human rights abuses being perpetrated by the Cuban government.

Many protesters held signs on Saturday condemning Biden for his inaction so far.

“Biden, history will remember how you turn your back to Cuba & all the Cubans who voted for you,” one sign read.

Other signs insisted Biden take military action rather than engage in talks with a murderous regime.

“Joe Biden, we need military intervention in Cuba, not dialogue or business with the fucking government,” another sign read.

Protesters around the U.S. who have joined the Cuban people from afar, as well as some politicians, have “escalated their calls for military intervention against the Castro regime to defend the lives of unarmed, peaceful Cuban protesters,” Breitbart News reported. A petition at Change.org urging military intervention has attracted nearly 400,000 signatures as of Wednesday, suggesting the idea is more popular than many establishment media outlets in the United States have suggested.

Biden’s response to protests in Cuba has been criticized for being unenthusiastic and slow. On Wednesday’s broadcast of the Fox News Channel’s Fox & Friends, Sen. Marco Rubio (R-FL) stated that he wished the Biden administration denounced the tyranny of Cuba with “half the passion” that they have for denouncing Republican elected officials.

During a press conference on Thursday, White House Press Secretary Jen Psaki said the administration is reviewing its policies toward Cuba.

“And as we look at those policies, one of the big factors is ensuring we are not doing anything to pad the pockets of a corrupt authoritarian regime,” Psaki said, while also suggesting Biden is considering providing humanitarian aid.

President Joe Biden said Thursday the United States was considering ways to force open Internet access in Cuba, which he called a “failed state.” He also said he would give Cuba Chinese coronavirus vaccines if he knew the shots would make it to the Cuban people.

Biden issued an initial statement on Monday claiming to “stand with the Cuban people,” but he failed to mention widespread reports of public gang beatings and live fire against unarmed protesters on the part of state security.