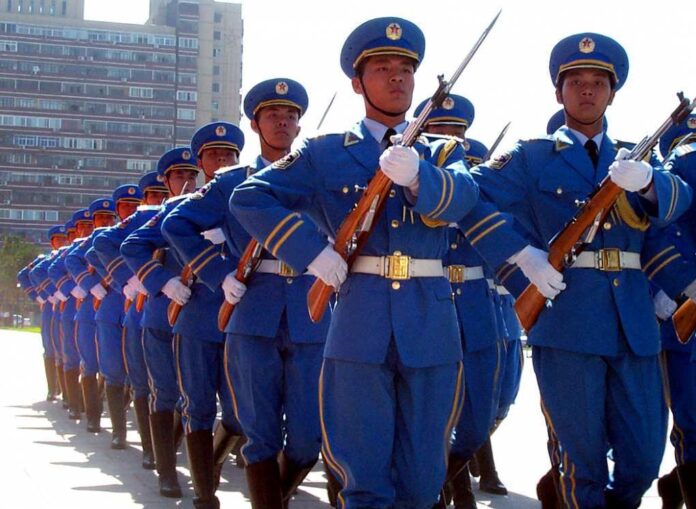 Roughly the size of Maryland and Delaware combined, Taiwan has been an independent country since breaking ties with Communist China in 1949, even if the Chinese refuse to admit it. The strategically located dot on a world roadmap has flourished under its own control and China doesn’t like how Taiwan has made a mockery of the communist lifestyle. They’ve proven how well free enterprise works.

China’s red regime views the relationship between the U.S. and the tiny island nation as detestable. Whether it was out of fright or anger, China choked on its chow mein when they were alerted to a second U.S. military aircraft touching down just outside of Taiwan’s capital city of Taipei. The first time it happened they let it go but this time it got their attention.

Granted, two aircraft, no matter how well equipped, couldn’t even scratch China’s surface, but still, they couldn’t let it go unnoticed. China could have just as easily expressed its anger in an email, but instead, the ruling powers chose to seize the moment by displaying their military might on the world stage.

To the tune of billions of yen, the Chinese staged an all-out beach landing assault exercise similar in size to D-Day. The Chinese People’s Liberation Army and Navy were called in to strut their stuff in a “look what we have” move. Naval amphibians rolled up on the sand as war-crying troops charged forward without resistance, rifle butting imaginary enemies and stabbing the salty air with their razor-sharp bayonets. The fake battle was declared a victory.

The Communist Party owned Global Times, China’s only legal newspaper, ran a headline story saying the military exercise was intended as a stern warning to the U.S. to back off. Not only is Taiwan too close for comfort but China is still butt-hurt over Taiwan gaining its independence.

The newspaper was quoted as saying the warning was also aimed at their “Taiwan secessionists” neighbors.

The brazen assault exercise was staged as close to Taiwan as the Chinese could get in the eastern province of Fujian. Since this exercise was such a spur-of-the-moment thing, the report said Chinese military officials are gathered around the drawing board etching out future drills of a more complex nature.

The Chinese government is by no means naive. Demonic spawns of Satan, yes. Stupid. No. They are fully aware of America’s big brother in the sky watching their every fart, but they like it this way. They enjoy wasting their money on scare tactics that never have and never will work, and who are we to deny them their simple pleasures?

Here’s the hilarious part. All of this came about after a U.S. government plane touched down at Taipei Airport for about a half-hour before taking off again. No combat troops hopped out with guns-a-blazing and no heavy artillery was offloaded from the passenger plane. Besides, it’s a public airport full of civilians, and unlike China, we don’t involve them.

The Chinese issued a grave warning concerning any aircraft that may wander into its declared airspace whether by intention or otherwise. They said there would be “serious consequences.”

The truth is, Taiwan is relatively safe from attack by any country, including China. As the largest global supplier of semiconductors, the world needs them more than they need the world. Any disruption to their supply chain would quickly paralyze technology worldwide, including your cranky teenager’s cellphone.

For kicks, the U.S. should dispatch a couple of military C-141 aircraft to Taipei Airport to do a quick touch and go. As a side note, the Chinese can never win a war. It takes motivated troops who value what they’re fighting for and they’d be hard-pressed to find any.