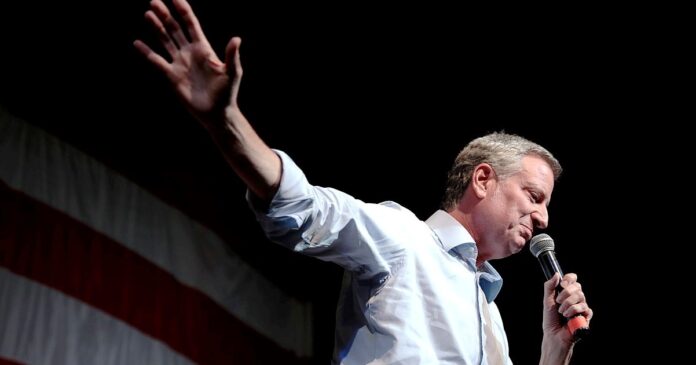 Liberals everywhere have come to conclude that they are immune to the laws that they love to break. Many of them think that because of the size of the crowd that they will never get caught. They fail to realize that there are cameras everywhere, and it is next to impossible to commit violent acts and get away with them.

Such is the case for two lawyers that thought they could attack the police and get away with it. These two morons are symbolic of all the liberals who think they will never get caught by the police. Their arrogance and pride help them to forget that they are being watched by cameras.

Democrats from Los Angeles to New York City took to the streets last year to create problems right before the election cycle. The wave of unrest and the liberal pushed pandemic was the Democrats’ issues to hide their fraudulent actions for the coming election.

In New York City, it was found that Mayor Bill de Blasio was supporting violent offenders. The liberal mayor thought it would be an excellent idea to defund the police to the sum of $1 billion. And he did it while the riots were in full swing.

In New York, the two lawyers were arrested for throwing Molotov cocktails at the police officers. These two lawyers thought it would be a great idea to join a violent crowd. After all, it seemed like they had the support of their drooling mayor.

A court reported stated that “Two Brooklyn lawyers, including an Ivy League graduate corporate attorney, are facing federal charges over accusations they tossed a Molotov cocktail into an NYPD vehicle early Saturday morning during a protest over the police killing of George Floyd.”

Their decision to take the bomb and throw it into the police car would be the action that would change their lives forever. The court statement also mentioned that “Colinford Mattis, 32, a corporate lawyer and member of Community Board 5 in East New York, was charged along with fellow attorney Urooj Rahman with the attempted attack on an empty police cruiser parked outside the 88th Precinct station house in Fort Greene.”

Their actions were deliberate. This is not a case of a badly thrown device. The court report stated that “Authorities say Rahman, 31, tossed a bottle filled with gasoline through a broken window into the cruiser just before 1 am Saturday but the Molotov cocktail failed to ignite. Rahman jumped into a van driven by Mattis and they sped off.”

All of their actions and profiles were wonderfully recorded b surveillance cameras. The two morons were taken into custody and placed in jail. The result is that they think they have reached a plea deal. Justice will be served.

Not much is said about whether or not they accepted the deal. But one thing is for sure: if they refuse the deal, they will go to prison for a long time. The court released proof of the deal as they wrote that “The two lawyers charged with torching an empty NYPD van during a Black Lives Matter protest in Brooklyn last summer were offered a plea deal by federal prosecutors earlier this month, according to new court documents. The suspects, Urooj Rahman and Colinford Mattis were offered the unspecified deal on Feb. 11, according to court papers filed Saturday by Brooklyn federal prosecutors.”

These two people deliberately attack law enforcement officers that have the task of keeping the peace. Each one of them has been protected by the police their entire lives. And they have the stupidity to turn their backs on the heroes by trying to murder them with firebombs.

The Republican Party now stands as the party that supports law and order. Democrats hate the police and seek to empower the criminals to continue their violent rampages against freedom and police officers.

Donald Trump encouraged Democratic leaders to put a stop to the violence, but they reject the notion. The liberals have proven yet again that they hate law-abiding citizens and love to embrace the felon that murders people.