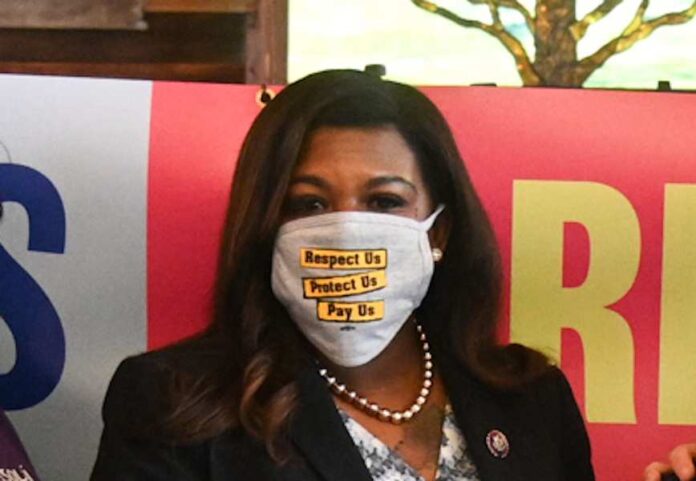 Liberals are really good at making demands of things that other people should give up…like security and peace of mind.

How is it that a U.S. Representative can spend months demanding that the police be defunded only to turn around spend close to $70,000 on private security?

Well, Cori Bush has managed to do exactly that.

The police are there to provide peace of mind. They are there to offer safety to communities. And without police presence, crime rates surge and people feel less safe within their communities.

We need the police – and it sounds like Cori Bush does, too. The only problem is that defunding the police is the latest and greatest focus for the left. So, she has to appear to want to defund while still doing what she can to feel safe.

The Democrat out of Missouri has been constantly pushing to defund the police as she believes that it would be a way to address systemic racism. Without the police, black people wouldn’t constantly be targeted.

She doesn’t seem to realize that without the police, people also won’t feel safe.

Though, she likely understands the concept of safety and security more than she leads on – especially with the spending that has been identified by Federal Election Commission records.

That’s quite a bit of money. In fact, it’s approximately a third of her campaign’s spending for the second quarter. It’s also double what she spent on private security for the first quarter of 2021.

Is it that she’s not feeling so safe these days? Well, the country is a scary place. Crime is up in a number of major cities, too. Why is that? Oh, that’s right. Democrats like her have cut the funds from law enforcement agencies around the country.

This is where the hypocritical actions of the Democratic Party set in. Cori Bush can afford private security, so it doesn’t matter if the police departments get defunded or not. And, there are other progressives that make up “the Squad” on Capitol Hill that also spend thousands of dollars of campaign funds on private security.

It must be nice.

They demand that the country lose its law enforcement. They singlehandedly cause the crime rates to spike. Then, they hide behind their private security.

Cori Bush doesn’t seem to understand exactly what she’s doing, though. She’s calling for the police to be defunded – and then hiring them after they’ve been “let go” from the law enforcement agencies. RS&T Security has a Facebook Page that boasts photos of law enforcement officers, members of the military, and more.

Bush believes that defunding the police will keep people alive. After all, if the police aren’t there to make the arrests, criminals get to roam the streets. Bush isn’t looking to keep criminals from committing crimes, though. And she certainly doesn’t want to be a victim of the crime – which is why she has the level of private security that she does.

Hypocrisy is rearing its ugly head. Unsurprisingly, Bush’s office didn’t want to respond to the press about how much money she’s been spending on security. She’ll protect the criminals. As for American citizens, well, everyone will have to fend for themselves.