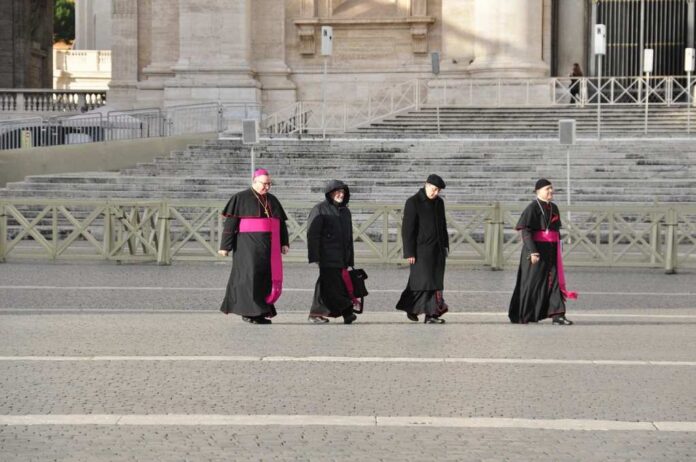 The Biden regime has renewed its attacks on the unborn by supporting abortion and pushing for its legalization everywhere. The liberals think that people have the right to kill unborn children just because they can. The right to live is a fundamental concept ingrained in every person. So, when the church steps up and supports life, they expect their followers to obey or have consequences.

The Catholic Church has stepped in defense of the babies and told anyone supporting abortion on the political level is in danger of losing the right to observe and taking communion. The issue is that practicing Catholics believe abortion is wrong, but politicians support it in the political world.

Their outward defiance towards the church and the right to live has prompted severe action against the liberal politicians that refuse to listen to their church leaders. A state senator out of New Mexico is upset. After all, his Catholic leader denied him the Eucharist because he supports abortion. The battle between political power and religious power occurs, and all the Democrats can do is whine about it.

Joe Cervantes is the senator under discipline by the Catholic Church. He stated on social media that “I was denied communion last night by the Catholic Bishop here in Las Cruces and based on my political office. My new parish priest has indicated he will do the same after the last was run off. Please pray for church authorities as Catholicism transitions under Pope Francis.”

Cervantes is praying that God will allow him to be able to take communion. He wants prayer that somehow Pope Francis will stop in and support his right to kill children. But for now, the murderous senator will have to live in exile and contemplate his belief system. He will have to decide if his eternal destiny is worth his political career.

I was denied communion last night by the Catholic bishop here in Las Cruces and based on my political office. My new parish priest has indicated he will do the same after the last was run off. Please pray for church authorities as Catholicism transitions under Pope Francis.

The senator was speaking about Bishop Peter Baldacchino. Instead of speaking to his Bishop about the issue, he took the problem to social media and tried to stink about it. He wants to force the Bishop’s hand and make him feed communion to his pathetic mouth. Baldacchino has taken a stand for life and facing Democratic persecution for his stand.

One report stated the senator was refused communion on the eve of a discussion by bishops will do the same for Joe Biden. The lousy senator thinks that choice is the right way to think, while his church takes the opposite stance. Cervantes has sold his soul to the devil by adopting a stance contrary to life’s truth.

Cervantes stated that “There should be no laws which outlaw the private decisions regarding pregnancy.” He believes that people should be able to kill at will. The liberals have poisoned his mind. There must be laws that govern life, or humanity will seek to destroy and persecute life wherever they can.

The Catholic Church drafted a document that has become a contested piece of Catholic law. The document will effectively ban any politician communion that supports abortion. That goes for the president as well. He has denied his faith by publicly supporting abortion and refusing to denounce it as the sin that it is.

Notable Democrats have taken offense to the church’s stance and have publicly moved to speak out against it. Jared Huffman has already accused the Catholic Church of playing politics. He stated, “If they’re going to politically weaponize religion by ‘rebuking’ Democrats who support women’s reproductive choice, then a ‘rebuke’ of their tax-exempt status may be in order.”

Huffman thinks that the Catholic Church, which has been around for centuries, is going to care if they lose a tax-exemption status or not. His threatening words have already isolated him from other liberals. After all, they do not want to risk eternal damnation because they fought against the Catholic Church.

Joe Biden is the president that supports killing unborn children, and he is not afraid to risk eternity in the process. The Catholic Church is just one of many organizations willing to step out alone and support life. The Democrats think they can fight against God, but they will find out that it is not as easy as they think.