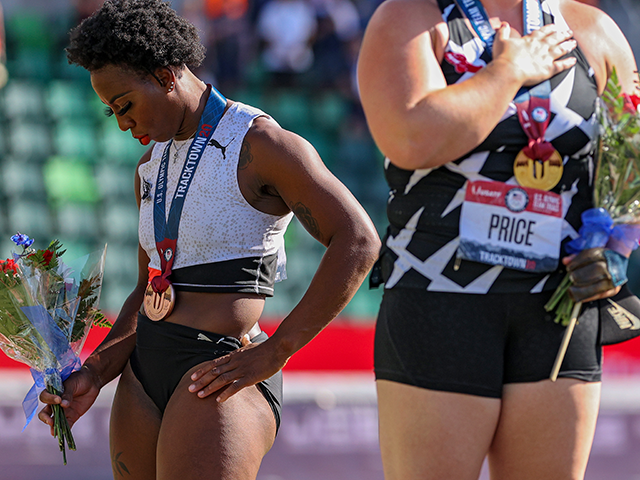 On top of that, the Woketards themselves are unhappy the games are taking place. They want the Olympics canceled because of the coronavirus. But then again, those assholes want everything canceled. Already Toyota has pulled its commercials over this stupid controversy, and ad revenue is what the Olympics are all about.

But as dumb as the China Flu controversy is in the age of the vaccine, one more threat to that all-import ad revenue is some 70 athletes catching the coronavirus, including some big-name draws.

Over 70 athletes have contracted the virus in Tokyo so far, including fan-favorites like tennis player Coco Gauff, who pulled out of the global event earlier this week.

Without star athletes, ratings stand to suffer. And while NBC has already locked in over $1 billion in Olympic ads, poor ratings threaten to create a knock-on effect for other revenue streams.

Overall, though, audience enthusiasm just isn’t there. Reuters released a poll Thursday that shows “[t]wo in five Americans do not plan on watching the Opening Ceremony for the 2021 Olympics.”

What’s more, only 39 percent of Democrats plan to watch, while even fewer Republicans (29 percent) plan to tune in.

So the New York Post is not kidding when it reports, NBC is “facing numerous threats that stand to make this year’s games a ratings dud.”

An earlier poll from Zeta Global found even more threats to NBC’s ratings gold and outright predicts “Tokyo Will Be One of the Lowest-Watched Summer Olympics of the 21st Century.”

“More than 60% of Americans were unable to express excitement or interest in the summer games, and at least 45% of Americans confirmed they are NOT looking forward to the games in any capacity,” the poll found.

The poll also dug up additional issues that are discouraging viewing. People are also unhappy that 1) no one will be in the stadium cheering the athletes, which loses the vibrancy of a live spectator sport, and 2) with the one-year postponement to an odd-numbered year, “many people are simply forgetting they’re being held.”

Another interesting find in the Zeta Global poll is more bad news for traditional media outlets like NBC.

“This year will be cable TVs last hurrah,” the pollster found. “Cable TV will be the most popular way to watch th[is year’s] Olympics [but] will be the last Summer Olympics where cable reigns supreme. By 2024, more people will watch the Olympics on mobile and CTV [streaming] than on cable.”

Cable TV is the affirmative action cash cow that keeps countless failed networks alive through carriage fees. Whether you watch them or not (and 99 percent of the public do not), if these networks are part of your cable package (CNNLOL, MSNBC, MTV, etc.), they receive a piece of your exorbitant monthly cable TV bill. Streaming completely removes this unearned revenue for these flop outlets, and in some cases, we’re talking hundreds of millions of dollars.

The Woketard Olympics deserve to flop. Normal people need to send a message they are sick of this garbage. The most pampered, genetically gifted, wealthiest, and elite people in the world should not be rewarded for posing as victims.