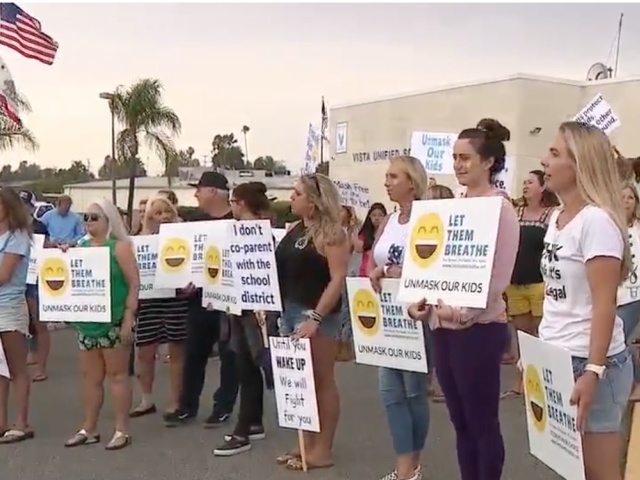 The San Diego-based group, which has 13,000 members, filed the lawsuit in San Diego Superior Court with the Reopen California Schools group, the San Diego Union-Tribune reported.

“We’re seeing kids be more anxious, more depressed, have difficulty engaging in their education when they’re unable to see each others’ faces, share smiles, and just start getting back to life with some type of normalcy,” Let Them Breathe founder Sharon McKeeman told the paper.

“The bottom line is the government should not be doing parents’ jobs. We’re the parents; we know what’s best for our children.”

Newsom’s mandate requires students and educators to wear masks at all times in K-12 schools, regardless of vaccination status. Masks are optional outdoors, according to the regulation.

The California Department of Public Health said mask enforcement will be handled by local schools “as the state recognizes the unique needs of each district and child,” according to the Mercury News.

The suit alleges Newsom and health bureaucrats violated the Administrative Procedures Act (APA), which dictates how rules will be made:

Compliance with the APA, which requires among other things public notice and comment for proposed regulations, is not a mere technicality. The procedures required by the APA ensure that regulations are clear and understandable to the public, are based on accurate data and sound scientific principles, and are consistent with the law.

California schoolchildren and their families are suffering irreparable harm each day that their schools require healthy schoolchildren to wear masks while indoors and to quarantine at home, while not being provided with a reasonable alternative to in-person instruction.

The lawsuit alleges Newsom’s order violates the Equal Protection Clause of the California Constitution because “Defendants’ mask mandate applies only to K-12 school settings, whereas California has mandated that fully vaccinated individuals, both adults and children, are not required to wear a mask at any time.”

Let Them Breathe is seeking to have the San Diego Superior Court invalidate the mask mandate and bar schools from excluding students who refuse to wear a mask indoors.

“It’s just shocking to me that we’re at this point. It’s heartbreaking and frustrating that we actually as parents have to file a lawsuit just for our kids to be able to engage in their education, share their smiles with people, and just feel comfortable breathing,” McKeeman told Fox 5.

The case, Let Them Breathe v. Gavin Newsom, is in San Diego Superior Court and a case number has not yet been assigned.
Kyle Olson is a reporter for Breitbart News. He is also host of “The Kyle Olson Show,” syndicated on Michigan radio stations on Saturdays-download full podcast episodes. Follow him on GETTR.