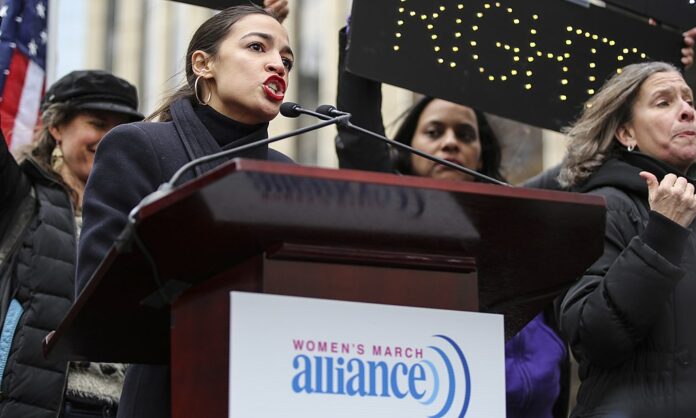 The Islamic terrorist loving Alexandria Ocasio-Cortez has found a new way of bringing herself to a new low as she gripes about how law enforcement conducts its missions.

The New York City Police Department has enlisted a new member to help keep police officers safe. A robotic dog is sent into dangerous situations with the purpose of gathering intelligence so the police do not walk into a trap.

It would have been better for her to reject the dog’s use on the grounds that the robot does not have a choice in what situations it is sent into. At least the notion would have made more sense than claiming racism has anything to do with her objection.

The witchy AOC stated that “Shout out to everyone who fought against community advocates who demanded these resources go to investments like school counseling instead. Now robotic surveillance ground drones are being deployed for testing on low-income communities of color with under-resourced schools.”

The latest tool used by the police is called “Digidog.” It is a 70-pound dog drone that has the ability to climb upstairs, open doors, and has the ability to allow communication between parties. It has been used to flush out the sewage that the AOC wants to protect. Its latest achievement was when it found the gunman that was hiding in a basement.

The AOC brands Digidog as a racist dog that seeks out people of color. She has no respect for the men and women that put their lives at risk every day just so the AOC can continue to lobby for her pointless attacks while living in a safe environment.

The AOC certainly does not care about police officers. She does love the sewage that likes to stalk people and kill them when they have the chance. The robotic dog saves the lives of the officers and others moving through dangerous locations.

The pointless argument that the AOC brings up is that the money could have been used to serve the community better. Translating her political talk simply means she wants to defund the police and keep the money for herself.

She continually keeps her neighborhood in a category of the underserved. She stated that “Please ask yourself: when was the last time you saw next-generation, world-class technology for education, healthcare, housing, etc consistently prioritized for underserved communities like this?”

If she is so concerned about the welfare of the community, she should have thought twice about killing the Amazon facility that promised to bring high-paying jobs to her district. But she would rather keep them in a state of poverty so she can continue to use them for personal gain.

The robotic dogs are used to provide needed information to the police so they and others stay safe. It has a final test phase to pass before it can be deployed on a larger scale.

Frank Gidiacomo is the NYPD Technical Assistance Response Unit Inspector. He noted that “This dog is going to save lives, protect people, and protect officers and that’s our goal.”

The robotic dog’s use has nothing to with a person’s color or what they look like in life. It has everything to do with keeping people safe. The AOC is a terrible person for even trying to racialize the issue.