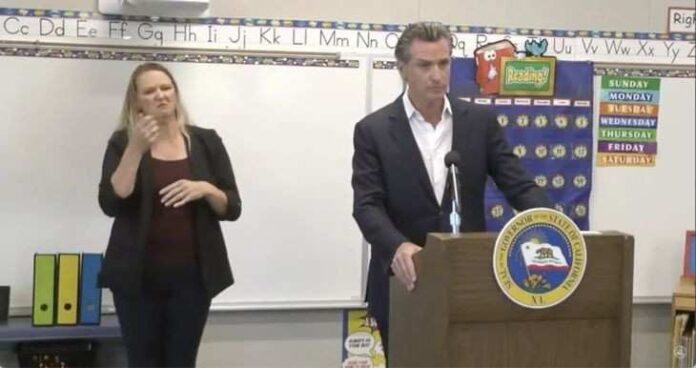 He’s not making a direct threat here but the implication is very clear. No one wants to come out and make a definitive statement at the moment. Californians are being given a directive, though: get vaccinated or risk another lockdown. This statement also casts major doubt on school openings come fall. Small businesses could be forced to close down again.

This goes against everything that was said by the CDC and the American Academy of Pediatrics just a few short weeks ago. The children need to be back in the classroom as soon as possible because they cannot handle any more setbacks to their development. The children have to be masked up, spread out and kept in the classroom at all costs.

Newsom is not going to go along with this and it is time for the state of California to stand up for what is right. “We don’t have to worry about being back this fall for in-person instruction if we all get vaccinated,” Newsom said. It’s easy to see what he means by this. The only surefire protection against the variants is vaccination.

Once you take a closer look at the average in-person index that Burbio has come up with, you can see which states are the best at getting kids back to in-person learning and which states are allowing their little ones to suffer. We’ll give you three guesses as to which state found themselves at the bottom of that totem pole.

The party of science does not like to listen to the scientists when they go against their chosen beliefs. Children are a low-risk group and the odds of serious illness are also much lower for them. Red states have been following the science for some time now but they are still being treated as if they do not care about their populations. Meanwhile, Newsom is openly contemplating closing the schools again.

Woah! Did @GavinNewsom just suggest schools might not open this fall, more lockdowns and statewide mask mandates unless everyone is vaccinated?

“We don’t have to worry about being back this fall for in-person instruction if we all get vaccinated.” pic.twitter.com/wIsvb7zyCw

This is not a man who cares about science, unless it enhances the positions he already holds. What vaccination rate would he need before he is willing to proceed with in-person instruction? California is 12th out of 50 states when it comes to the percentage of their population that has already received one dose of vaccine.

Near as we can tell, there is no actual benchmark that any of these states are shooting for. Everyone is just going to live under a vague cloud of existential dread. While there is certainly a surge taking place with the Delta variant at the moment, California’s hospitalization numbers remain as low as they have been since the pandemic began. California parents need to be preparing themselves now.

Newsom is almost assuredly going to be closing the schools before too long. The only hope for Californians at the moment is that he is removed from his post by a September recall election. Now, a big debate has arisen among the powers that be on how to get the holdouts to get their jabs.

Some writers have tried to chide those who are berating or mocking the non vaccinated. Let’s be real here: no one who has been going without vaccination for this length of time is going to be persuaded by a stranger because they used the proper tone. The only way that they are going to come around at this point is if they are truly terrified of the variants or if a friend or family member is able to convince them.

At this point, all that is left is full FDA approval for the vaccines. They cannot rush this step of the process, though. Otherwise, the holdouts are going to be claiming that the approval was rushed for political reasons. Instead of closing everything back down, Newsom should be focusing on the approval process and issuing mandates to the necessary employees. It’s time to stop punishing the children for mistakes that the adults have made.