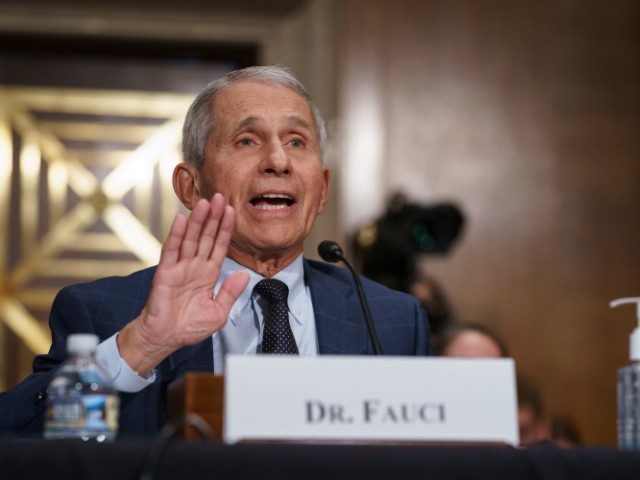 Paul spoke to WBKO this week following the viral clash, which effectively saw Fauci denying his own definition of gain-of-function research.

“I think he has self-interest and not being attached to this research, because more and more of the evidence is pointing towards the virus having come out of that lab, if it did, you can see how moral responsibility or culpability attaches to Dr. Fauci because he had the poor judgment to fund this lab,” Paul told the outlet, adding, “[It was a] mistake to fund the lab in the Wuhan period because I don’t think the Chinese government or military has been very forthcoming”:

There are reports that the Chinese military has actually been working on weaponizing viruses. So I think it was a poor judgment. Even as much as a month ago, Dr. Fauci was asking the Judiciary Committee whether he still trusted the scientists and the Chinese scientists. And he says, Oh, of course, he was also asked in 2012, if a bug should escape, if a virus should infect a researcher, escape and become a pandemic, what then? And he said, Well, the science and the research is worth it, even if a pandemic should occur.

“This research still goes on in the United States, we should want to know, you know if the NIH is still funding this type of research in North Carolina? And in Galveston, do we want this to occur? Are we worried that we could have the worst virus leak out of the lab?” he asked, identifying these as “important questions” and noting Fauci’s decision to attack him rather than answer them.

“So these are important questions, and instead of really answering any of the direct questions I had, it became sort of an ad hominem attack with him simply calling names,” Paul added.

During Tuesday’s clash, Paul grilled Fauci about the NIH funding gain-of-function research at the Wuhan lab, citing the Wuhan Virology paper entitled “Discovery of a Rich Gene Pool of Bat SARS-Related Coronaviruses,” which detailed the research. Nonetheless, Fauci became visibly irritated and denied lying to Congress about the NIH funding such research.

“You take an animal virus and you increase this transmissibility to humans, you’re saying that’s not gain of function?” Paul asked Fauci.

“It’s a dance,” Paul said, “and you’re dancing around this because you’re trying to obscure responsibility for four million people dying around the world from a pandemic.”

Paul has since said he will ask the Department of Justice for a criminal referral against Fauci.

“You know, we have laws in Section 1001 of the Criminal Code that says you can’t lie to Congress. So I think there needs to be repercussions,” Paul told WBKO.

“I gave him every chance to retract or modify a statement, it would have been very easy for him to say, well, there is some debate over whether or not this was gain of function. But I tend to decide with those in my administration and said it wasn’t,” he continued.

“He just acted as if there’s no way it can be gain of function, and then call me a liar,” Paul added. “So he really didn’t respond to the specific arguments or whether it’s gain of function or not.”