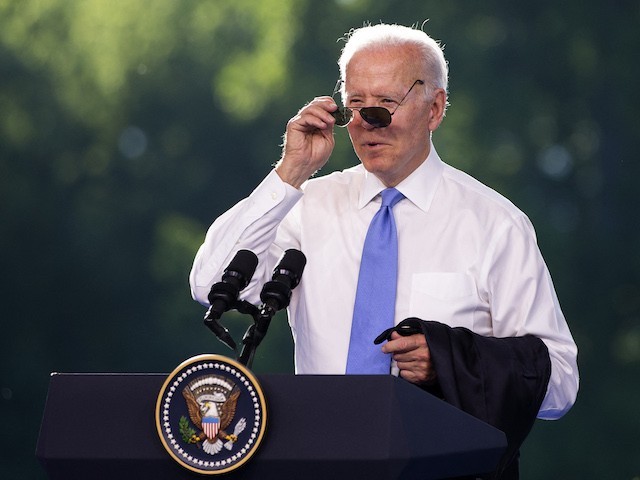 A majority — 55% — of the public say they are pessimistic about the direction of the country, a marked change from the roughly one-third (36%) that said the same in an ABC News/Ipsos poll published May 2. In the early May survey, Americans were more optimistic than pessimistic by a 28-percentage point margin. Optimism is now under water by 10 points. Looking ahead to the next 12 months, fewer than half — 45% — now report feeling optimistic about the way things are going, a significant drop from about two-thirds (64%) in the May poll.

The decrease in optimism has occurred among Democrats, Republicans, and independents.

“Optimism is down about 20 points among Democrats and Republicans and down 26 points among independents. Among Democrats, about 7 in 10 (71%) now say they are optimistic about the direction of the country over the next 12 months,” the outlet said.

Breitbart News reported Friday Biden’s approval rating was at the lowest point of his presidency, according to a poll from Gallup.

“The poll, taken from July 6-21 shows that Biden has a 50 percent approval rating, down six points from a 56 percent rating in June,” the outlet continued:

Biden now faces questions about his policies as Americans are experiencing growing inflation. The country also faces growing fears about the delta variant of the coronavirus spreading across the country, even infecting vaccinated Americans. The president also has yet to deliver on a bipartisan infrastructure deal, as negotiations between Republicans and Democrats continue in the Senate. Other issues of concern include the growing number of migrants crossing uninhibited across the Southern border.

Meanwhile, reducing crime and promoting a strong economy needed to be priorities for Biden, a Thursday poll from the Associated Press-NORC Center for Public Affairs Research found.

“Seventy-one percent of the American population believe promoting economic growth, the opposite of inflation, should be the highest priority for the Biden administration,” according to Breitbart News.

The ABC News/Ipsos poll was performed July 23 through 24, 2021, among a random national sample of 527 adults. The results have a margin of sampling error with 5.0 points, which included the design effect.