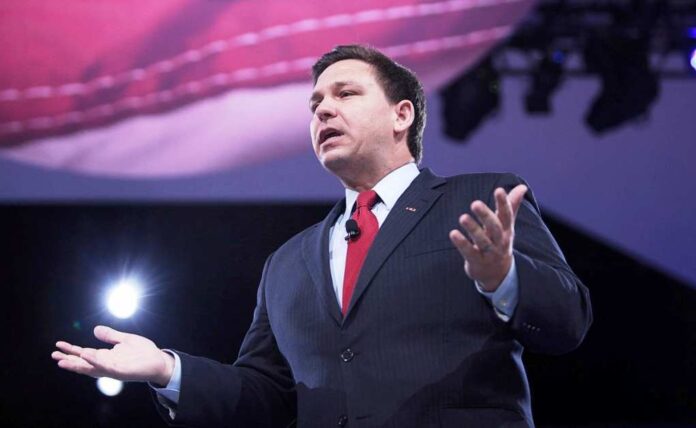 Republican Governor Ron DeSantis of Florida stood tall on Thursday defending his position that he would not impose a mask mandate on school children for the upcoming school year.

DeSantis said, “There shouldn’t be any coercive mandates on our schools,” and then he added, “We certainly will not have any mandates on students and on parents in the upcoming school year.”

White House Press Secretary Jen Psaki was asked by an ABC News correspondent about DeSantis’ position at a press briefing. Psaki responded that “as a parent,” DeSantis’ position was “greatly concerning” to her, adding, “That puts kids at risk.”

Then the ABC News correspondent, Karen Travers, pushed Psaki to go after DeSantis by saying, “Florida Governor DeSantis was talking about mask mandates for kids earlier this morning. And he said, ‘We’re not doing that in Florida. We need our kids to breathe. We need our kids to be able to be kids.’ He said, ‘It’s terribly uncomfortable for them to do it.’ That obviously goes against the CDC guidance for kids under 12 who aren’t vaccinated and what the president said last night. Is that putting kids in Florida at risk?”

Psaki took the bait and went even farther in her criticism of DeSantis, “Well, as a parent myself, and I know you are one, if I were a parent in Florida, that would be greatly concerning to me, because kids under the age of 12 are not vaccinated.”

She continued with some intensity, “They’re not eligible yet. As the president said last night, obviously it’s going to be led by the FDA, but certainly, we hope that will be soon. But that puts kids at risk. It’s not aligned with public health guidelines. We know masks are not the most comfortable thing. I will say, my kids are quite adjusted to them, as I know many kids are. So certainly we would have concern about any step that doesn’t abide by public health guidelines, and we think it puts people at greater risk.”

Governor DeSantis has been consistent in his position regarding the federal government mandating masks on kids. He had already said, “We need our kids to breathe; we need our kids to be able to be kids. We need our kids to able to breathe. It’s terribly uncomfortable for them to do it — not very much science behind it. There are some schools we had, didn’t do masks, others did, the outcomes were not meaningfully different, and so I think it’s really important that — parents obviously can equip their kid to go to school however they want, but there shouldn’t be any coercive mandates on our schools, and so we want to make sure that as of right now, all the school districts are going in that direction.”

DeSantis won some popularity with his constituency when he talked about putting our children first. “We gotta look out for their education. Is it really comfortable? Is it really healthy for them to be muzzled and have their breathing obstructed all day long in school? I don’t think it is. I’ve got a three-year-old son, and you got people like Fauci saying he should be muzzled, that you should be throwing masks on these three-year-old kids. It’s totally unacceptable and certainly unacceptable to have any level of government imposing that on parents and on kids.”