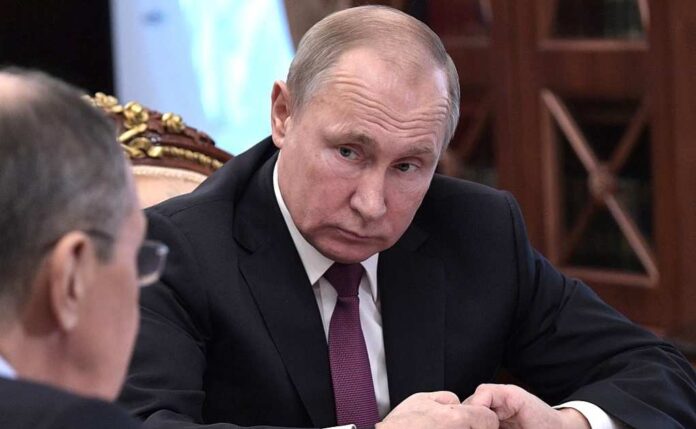 There is nothing more gruesome than purposely inflicting excruciating pain on a person, but the Russians appear to revel in it, and desperate pleas for mercy only increase its entertainment value. Russian mercenaries roaming the sands of Syria are in their element. They couldn’t ask for a better playground.

A dried-up oil rig in the middle of a Syrian desert should not go to waste when the structure is still in good enough shape to throw a shindig in. The tough part is in getting people to drive the distance to attend. Sometimes they need a bit of undesired coaxing in the form of rifle barrels pointed at their heads.

A Syrian construction worker who worked just over the border in Lebanon was on his way home after a tough day of pounding nails in the scorching heat. The 31-year-old had a wife and four kids to feed. He was stopped by four guys wearing fatigues and couldn’t refuse their invitation to be the guest of honor at a little soiree they were hosting.

The man’s name was Mohamad and he’s dead. The Russian mercenaries killed him, but not before they dragged him out to the oil rig they had redesigned into a torture chamber and had the time of their lives at the poor guys’ final expense.

The auspicious occasion, captured on video by one of the assailants, was later posted online. It was too hot inside the chamber so this party took place outside. The belly-roll laughter of the mercenaries who were taunting Mohamed in Russian almost drown out his agonizing screams for mercy

The video was edited to include the music of a nationalist military little diddy called “I am Russian Military Forces,” being played in the background. But the video’s most distinct noise came from the earth-shaking thuds of the sledgehammers as the men were smashing Mohamad’s hands and feet.

When the men finally tired of having fun they gave Mohamad a much-needed break from the pain by chopping his head off. But before calling it a night they ripped off the dead man’s shirt and wrote on his chest, “for VDV and reconnaissance.” Roughly translated this means they are clearing the way for Russian airborne troops to drop in and this guy was in the way.

The Russian murderers didn’t do a very good job at masking their identities and one of them was recognized as Novaya Gazeta, one of Vladimir Putin’s right-hand guys. Gazeta has heavy connections to a private military group of mercenaries known as the Wagner Group. If you want someone put down and they’re a high-profile figure, these are your guys but be forewarned, they get paid handsomely for doing what they love.

Even though the Wagner Group claims to have no ties with the Kremlin, President Putin gave them his seal of approval in 1999 by saying, “These people risk their lives and by and large this is also a contribution in fighting terrorism … but this is not the Russian state, not the Russian army.” He praised them.

The Wagner group, and Putin, can claim whatever they want, but the fact that the Wagner Groups training camp is attached to a Russian military special forces base tells a different story. Just the fact that Putin is aware of them and allows them to operate is concrete evidence of the connection. Putin hears every fart they make.

Mohamad was murdered in 2017. Now, four years following his death, three non-profit organizations have filed a major lawsuit against the Wagner Group. The NGOs are from France, Syria, and oddly enough, Russia. The lawsuit is also inclusive of previous war crimes carried out by the group.

The lawsuit was filed at the urging of Mohamad’s brother, Abdullah, and this is the first time the Wagner Group has ever been challenged in court. The three human rights groups say the group must be held accountable for a long list of continuing atrocities. They also claim the group has aided Moscow in advancing its agenda in Syria, Ukraine, Libya, the Central African Republic, Sudan, and Mozambique.