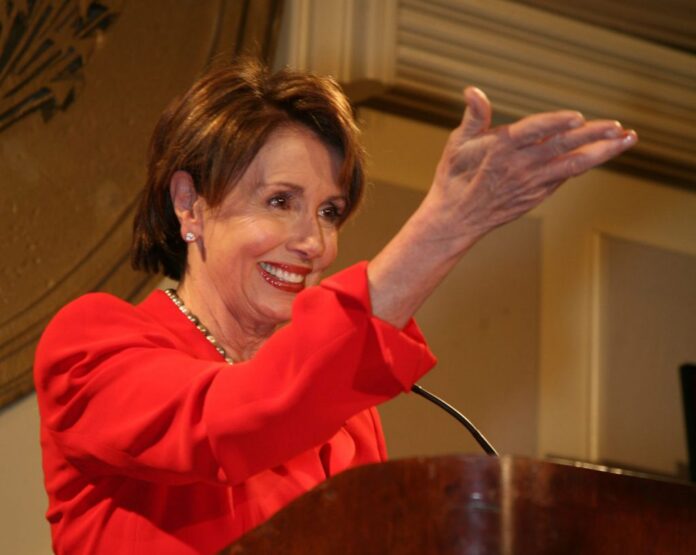 Why is it that the Democrats only get religious when they think that it will benefit them? That is not the way that religion is supposed to work.

When Amy Coney Barrett was to be confirmed, they lost their minds because she was a Catholic. Yet, we’re not supposed to flinch when Joe Biden identifies as Catholic. When it’s convenient, Nancy Pelosi will identify as being Catholic, too.

There’s a term for that – CINO. Catholic in Name Only. You can’t claim that you’re Catholic if you go against all the teachings of the church, including supporting abortion.

Pelosi has even gone as far as supporting other Democrats who want to remove the use of the Holy Bible during the swearing-in process and the use of “So Help You God” being said when taking an oath.

The Catholic Church has taken note of the hypocrisy of many Dems. They’re not eligible for communion as a result of not being the practicing and respectful Catholics they claim to be.

Now, Pelosi has made sure to pave the way to heaven for Joe Biden.

When the Speaker of the House introduced Joe Biden to the House Democratic Issues Conference, she said that the nation is “blessed” to have Biden as the president. She went on to say that “He is an extraordinary president. He knows how to get the job done.”

Wow. That’s a lot of hypocrisy in a short period of time.

Getting rid of religion has been a top priority for the Democrats for a while. So, using words like “blessed” shouldn’t even be a part of Pelosi’s vocabulary.

Then, she goes on to say that he is “extraordinary.” Is he, though? And how would we even know? He’s been in the role for less than 100 days and he hasn’t even held a presidential press briefing. Using a word like “extraordinary” only shows that Pelosi is trying entirely too hard to suck up to the president.

Are we supposed to suddenly change our minds? If anything, we should really start questioning what it is that Nancy Pelosi is up to. She talks as though she’s trying to convince herself that Biden is as great as she needs him to be.

Throughout her introduction of Biden, she goes on to call him a “battle-tested, forward-looking leader.” She talks about all of the values and experience and strategic thinking that he has to offer.

Yikes. None of this could be further from the truth.

Those values that she speaks of are similar to her own. Being a CINO, they care not about abortion. Pelosi has said that as a practicing Catholic, abortions are “sacred ground.” She has refused to support a bill that bans late-term abortions. Put simply, she’ll allow such abortions. She believes that religion and politics have nothing to do with one another.

Why, then, do the Democrats insist on making abortion a political issue? Shouldn’t that be a decision between the person asking for the abortion and their maker?

We can’t possibly listen to the hypocrisy that Pelosi spews from one moment to the other and feel confident in her words.

She is doing her best to convince the American people that they made the right decision by electing Joe Biden as the president. Yet, he has done nothing extraordinary.

She has all but said that he is a gift from God.

Please, Madam Speaker. Be honest about your faith. Do not use words like “blessed” when speaking as your lack of faith does not allow the word to hold any strength. And do not refer to Biden as being an “extraordinary” anything when he cannot even bother to work with Congress on the issues that matter most in this country.