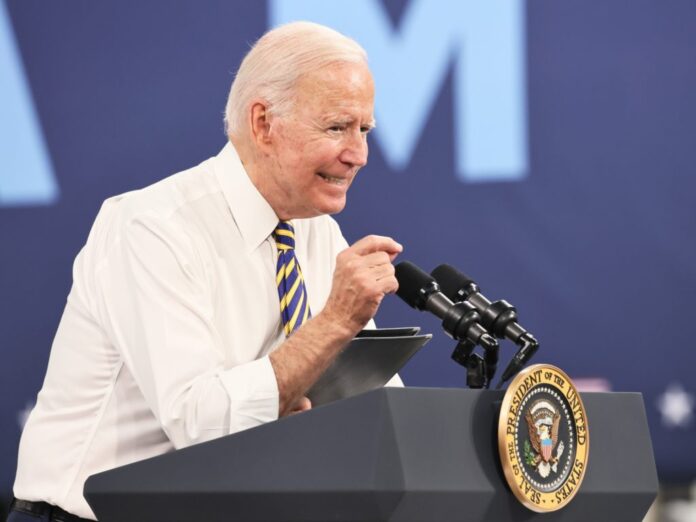 RNC Research shared the video of Biden and captioned it “Joe Biden, a career politician who has been in politics for 48 years, claims he “used to drive an 18 wheeler.”

RNC Director Zach Parkinson said there was “zero evidence that Biden used to drive an 18 wheeler.”

“The extent of Biden’s trucking experience is that he **rode in** a truck once, for one night in 1973 (he made sure to return home by plane though),” he tweeted.

Fox News later pressed the White House on Biden’s claim with a spokesperson observing the president “rode” in a truck back in 1973.

U.S. President Joe Biden speaks at Mack Truck Lehigh Valley Operations on July 28, 2021 in Macungie, Pennsylvania. He spoke about the importance of manufacturing in America and buying products made in America and supplying job to workers. (Michael M. Santiago/Getty Images)

The spokesperson shared with Fox News a 1973 article from the Wilmington Evening Journal showing the president sitting in an 18-wheeler, not driving it.

The president’s spokesperson pointed to a United Federation of Teachers post that touched on Biden driving a school bus in the past as a summer job.

During his speech in Pennsylvania, Biden also joked about wanting to drive a truck.

“Well, I’m not going to say anything; I just came to drive a truck,” the president said. “And I’m not sure which one I want to drive. That one? There’s one back in the corner you can’t see. It’s the biggest damn pick-up truck you ever saw in your life.”