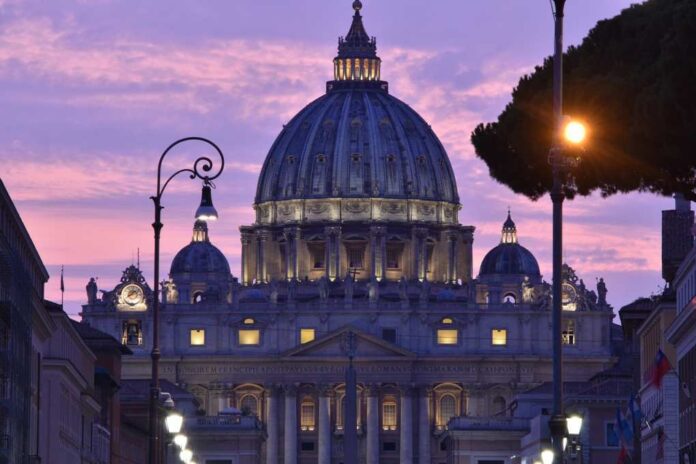 The Vatican is a world unto itself. For centuries the Catholic man/gods have ruled the roost with little interference from pesky outsiders reviewing the spoils of their labor. No one has dared to question their elaborate gold-plated goblets or the priceless art hanging on their fortress’s sacred walls. Their magnificently ornate worldwide showplaces, cleverly disguised as churches, are passed off as gifts from God for worshipping him correctly.

Since the Vatican is controlled by a hierarchy beyond the understanding of mere mortals, they’ve been left to continue their atrocities and crimes against humanity, pedophilia and all. But what goes around eventually comes around.

The past several years have not been kind to the Vatican in terms of a modern, educated, and more advanced world being able to see things they were heretofore blinded from. Their latest escapade deals with the holy men’s blatant and egotistical misuse of funds received via the church’s immense mass of genuflecting worshippers.

Since times have changed, the Vatican appears to be cleaning up its act, but only after being caught with its hands in multiple cookie jars. Vatican prosecutors have announced that the biggest trial in its history is about to get underway, and they’re going to personally handle it from the inside.

A Cardinal and nine of his silk-robed henchmen are accused of emptying the Vatican’s well of tens of millions of dollars with little explanation to offer. They’re accused of helping out friends and family members, dealing with shady underworld ‘so-called’ money managers, and making tons of horrible investments, many of which are unaccounted for.

The trial is the result of a two-year investigation concerning a London real estate deal to the tune of 350 million euros. An investment that never provided even a single return. It brings into question why such a small handful of people with little expertise and absolutely no oversite were able to transact such a secretive deal. They demolished the Vatican’s finances and only added to the growing worldwide criticism of the Catholic church.

Here’s where things get really good. Even the Pope isn’t exempt from the prosecutors’ death grip. They say Pope Francis and his top guys not only knew what was going on behind closed doors, but in many cases, they authorized doling out cash for frivolities and bad investments. They did so without proper documentation and without bothering to read the fine print.

This also raises the question of why the guys being prosecuted were singled out when virtually anyone in any Vatican position with access to the bank account is guilty. Plus the fact that any financial dealings of any sort are required to be reported to religious superiors which some were, while others were strictly under the table.

The key suspect in the London deal avoided indictment by flipping. Monsignor Alberto Perlasca was identified as running the office that handled the entire transaction from start to disastrous finish. Perlasca recanted his previous testimony in which he had lied. So still in need of a scapegoat, the Vatican has picked Cardinal Angelo Becciu to play the role.

Pope Francis, in full control of everything righteous and holy, has already pretty much beheaded Becciu in his own mind. Last year Francis threw some documentation in Beccius’s face showing where he had slipped 100,000 euros to a bogus charity located in Sardinia operated by Becciu’s baby brother. Becciu was stripped of his sainthood and forced to resign.

He’s now been charged with embezzlement and for putting undue pressure on Perlasca to lie for him under oath. Becciu is claiming his total innocence.

Also going on trial is Cecilia Marogna who Becciu brought on staff as an external security consultant in 2016. Prosecutors say the two of them were in cahoots for embezzling 575’000 euros which were supposedly used to free some Catholic hostages who were being held for ransom.

Instead, records indicate that the money was spent at luxury shops, high-class hotels, and to help pay some overdue bills. Marogna claims it’s a scam and a load of bunk. She said the enormous expenditure was legal compensation for her near priceless services.

Because of the Vatican’s mysterious secretive ways, it’s difficult to say who’s guilty and who isn’t, and we may never know for certain. It could all be for show. The Vatican is an old dog that often relies on its old tricks. Is this just another one of them? You tell us.