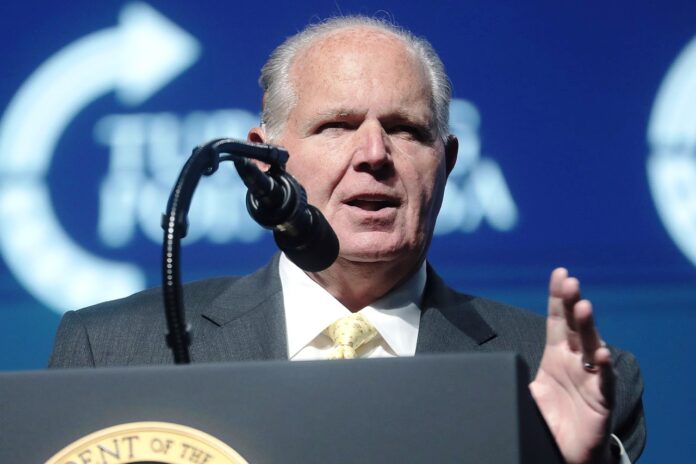 As conservatives contemplate the world of talk radio without legendary host Rush Limbaugh, longtime “ditto heads” await word of what will happen to the widely syndicated coveted daytime slot. According to Bo Snerdly (whose real name is James Golden) “Rush’s legacy is going to live on and we are not going to let it die.”

The Rush Limbaugh Show regular producer made an appearance on News Max’s Greg Kelly Reports, saying that the show has remained on the air since the broadcasting icon’s death just days ago and that his showrunners weren’t going to let the most listened to talk radio show in United States History die.

When asked about whether the show would have a new host he answered  “Yes” but that he doesn’t, “have any idea who….that’s above my pay grade.”

The beloved Snerdley ended the show by addressing those who are going after Rush, now that he’s not around to offer one of his scathing retorts on air, as he so often did during his 30+ years in broadcasting.

“Those of us who love Rush are going to make sure that the correct legacy for this incredible giant is the correct one.”

Snerdly, who produced the show for more than one decade, said he plans to stay with the program for the foreseeable future.

In a recent broadcast, Rush, and his wife, Kathryn spoke about how she and the late radio host planned his funeral after receiving his terminal diagnosis. According to Kathryn, they spoke openly about his funeral.

“So that conversation happened last year in about October. And we were walking around our house and just talking briefly about his upcoming event.’ (chuckling) We use the word ‘event’ because that was a little bit more (chuckling) fun than the other. But, yes, we did plan this through all of last year knowing that at some point the day would come,” Kathryn said.

“Obviously, it came a lot sooner than we would have hoped and liked, but we did have a plan in place. The only problem was we had hoped to invite a lot of Rush’s friends, a lot of colleagues, and a lot of the listening audience. But due to COVID, we couldn’t do that.

“I obviously left out a few key details that he didn’t really need to know, but he knew the majority, and he was very, actually, excited. So that can give you some comfort. But Rush was buried last Wednesday in St. Louis, Missouri, at a wonderful cemetery called Bellefontaine — it could also be pronounced “Bell Fountain” — a cemetery in St. Louis, Missouri.

During the show, they played a clip of the two talking:

“So I am walking with Rush and explaining to him his event, and I told him all he has to do is show up, which I’ve also arranged, Kathryn said laughing.

“Yeah, and it is an event, and it’s awesome,” Rush responded. “I mean, I hope you get invited to it. I mean, what she just described to me is incredible. Sorry, I’m gonna miss it. But —

“But we decided that we would be open and direct on it so that we can plan it very beautifully, and I told Rush that he is just shy of a president, and presidents get this kind of treatment; so he deserves that,” the broadcaster’s wife said.

“It’s gonna be beautiful. Be there or be square. Rush, don’t be late,” Kathryn said, to which Rush replied, “That’s up to you.”