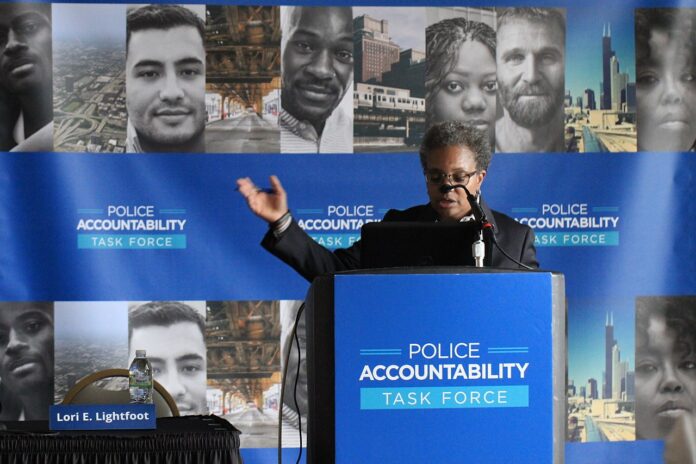 Lori Lightfoot is the mayor of Chicago, and she has been under scrutiny for her failure to work with people of a different skin tone than herself. Logic dictates that she should apologize for her actions and seek to do better in the future. But that is a far cry from what she has done. She has come back out on the public stage and ranted about how “unapologetic” she will be because she believes there is nothing wrong with being a racist towards a white man.

Lightfoot has only allowed non-white female reporters into her office to interview her. Her reluctance to work with people has earned a reputation as a racist. She is a feminist Nazi that cannot believe that other humans do not look like her.

Lightfoot has stated that “I would absolutely do it again. I’m unapologetic about it because it spurred a very important conversation, a conversation that needed to happen, that should have happened a long time ago.”

It was something that she did in her past and yet has no intention of changing how she meets people. She absolutely will not meet with people that she does not trust. And if they do not look like her and believe the nonsense and lies she holds, too, then they are not welcome in her presence.

Lightfoot thinks of herself as a goddess that only a select group of people can be around. The twisted mayor is the queen of the hill, and in her mind, no one will take that away from her. People of color are the only ones she is going to let into her office.

Her Democratic views are contrary to the story that her party tries to push. They try and make people believe that racism does not exist within their party. And yet, here is one of the members racially profiling people by the color of their skin. The Democrats are a bunch of racist liars.

Lightfoot had come out and stated that “In looking at the absence of diversity across the City Hall press corps and other newsrooms, sadly it does not appear that many of the media institutions in Chicago have caught on and truly have not embraced this moment.” She has taken it upon herself to try and make the city government absent of white people.

White people are just not allowed or welcome in Lightfoot world. All she could see was white males walking around Chicago, and that troubled her. Encouraging people to get involved is not done by excluding people because of the color of their skin. It is done by empowering everyone to excel at what they are good at and learn from each other.

She tried and said that diversity and inclusion are the only way things can change. But here, she is deliberately excluding every person that does not have a tint of black in their skin. It is a wonder that any person would ever want to work for a monster named Lightfoot.

She lied to the people when she stated, “This is exactly why I’m being intentional about prioritizing media requests from POC reporters on the occasion of the two-year anniversary of my inauguration as mayor of this great city.”

The same thought is echoed around the media as she has expressed the same nonsense multiple times. She does not want white people to even be in the same room as she works.

Lightfoot believes that she is somehow living up to campaign promise to disrupt the “status quo.” But all she is doing is dividing a city immersed in a massive crime wave that she created. She has yet to work with other divisions in the city to help solve issues plaguing the people. She is more concerned with who she is sitting by than serving the people of Chicago.

The sick little mayor believes that diversity should be a method of hiring people. She would dictate that there needs to be two of every color before a third could be hired. Her method is not part of what it means to live in America. It is a method of dictatorship found in socialism.