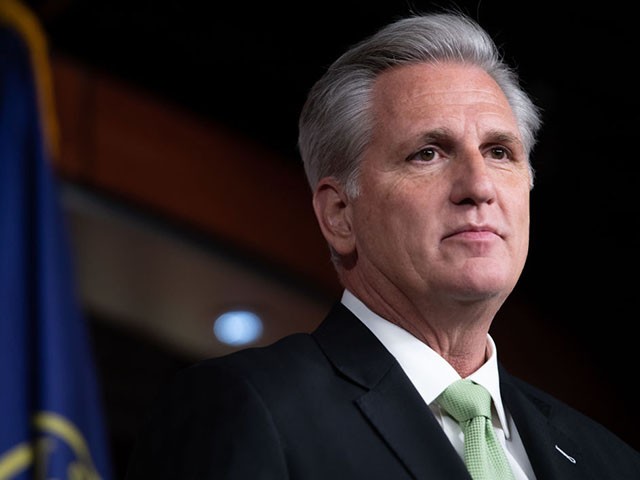 McCarthy said he would probe issues such as suspicions of insider trading by House Speaker Nancy Pelosi’s (D-CA) husband and the art dealings of President Joe Biden’s son Hunter. The investigations would stand in contrast to Pelosi’s recent probing of the January 6 Capitol riot, which McCarthy refused to participate in because of Pelosi’s investigative committee’s partisan composition.

“You know what? We will look at any of the fraud and abuse that has gone on,” McCarthy vowed. “We will have real investigations.”

He said that as economic inflation reaches a 30-year high, wealthy politicians such as Pelosi and Joe Biden are not experiencing the same cost burdens as the average American, as indicated by their families’ recent lucrative activities.

“Which American would not be worried about [inflation]? Pelosi wouldn’t be worried about it because her and her husband just made $5 million, not buying stock, but trading options on tech stocks when Congress was actually taking legislation up, $5 million in one month. Can you imagine that?” McCarthy asked. “And then you’ve got the only other person who wouldn’t be nervous about inflation. If you had a son that was an artist that could sell paintings for $500,000 — which, he’s never been an artist before. Those are the only two families that I could think of that aren’t worried about inflation in America.”

The tension between McCarthy and Pelosi hit a peak recently after the speaker denied two of McCarthy’s appointments to her January 6 select committee, prompting McCarthy to pull all of his chosen members off of the committee and write off the committee’s work off as illegitimate and a “sham.”

McCarthy’s ire toward the speaker only grew this week when Pelosi reinstated a mask mandate in the House after the Centers for Disease Control and Prevention (CDC) issued new guidance that fully vaccinated individuals wear a mask indoors in public if in “an area of substantial or high transmission.” The Republican leader responded to the mandate by delivering a fiery speech on the House floor, accusing the speaker and the CDC of making rules that lacked appropriate scientific backing.

He called the new mask guidance a “major failure” on the CDC’s part, saying the agency lacked transparency in its decision and that it used, in part, one study that was not applicable to the U.S. as its justification for the move. “It’s casting doubt on an effective vaccine,” McCarthy said, asserting vaccines are trustworthy but that the Biden administration is threatening Americans’ perception of them.

McCarthy also excoriated Pelosi, as well as other Democrats, for refusing to follow their own rules after Pelosi was spotted repeatedly without a mask this week, including at a photo op during the swearing in of Rep. Jake Ellzey (R-TX). Certain Democrats “are not for the people,” he said.

“Think about it. Pelosi starts and tells you you can’t get a haircut, but she gets one,” McCarthy continued. “You’ve got Gavin Newsom who sits there and tells you you’ve got to wear a mask as you’re eating dinner — even then he goes out with everybody, doesn’t have it on, and then anybody else can’t go out to eat, and he goes to one of the most expensive restaurants in California. You’ve got Paul Pelosi and Nancy Pelosi off the investment of options into high-tech stocks, yet at the same time Congress is taking up the issue. You’ve got Nancy Pelosi now claiming that you have to wear a mask if you’re in the House, but not in the Senate — because the science is different — but she doesn’t wear a mask. They are not ‘for the people.’ They are about themselves, and this is the wake-up call of this new Republican party.”

McCarthy also quipped about how the “science changes in the middle of the Rotunda” of the Capitol building because Senate Majority Leader Chuck Schumer (D-NY) has not made the same mask requirements as Pelosi.

“You can’t impose these kinds of draconian actions without having any science behind it,” McCarthy said. “And when I questioned her on not having the science, she called me a moron. This reporter came up to me and said, did I want to call her a name? The only thing I’m going to call her is former speaker. Hand over the gavel and let’s move on.”