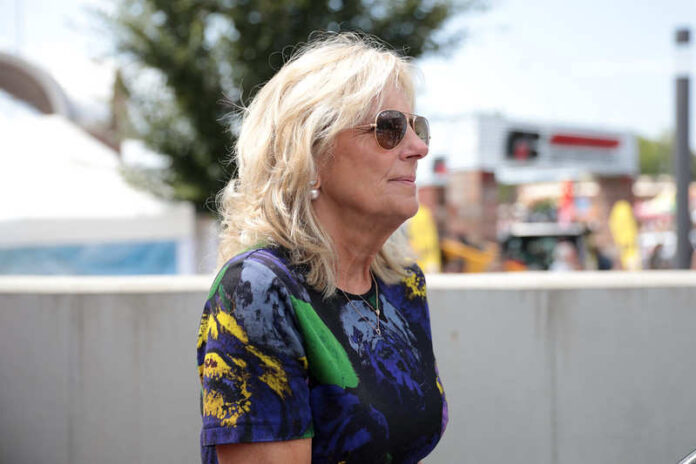 The First Lady has been gallivanting around the United States on taxpayer dollars. It’s all under the ruse that she’s promoting the vaccine. Yet, she’s traveled to quite a few vacation hotspots along the way, too.

Her travels most recently brought her to Hawaii. This state is actually one where there’s not a problem of getting people vaccinated. It has one of the highest vaccine rates and lowest COVID transmission rates in the country. Surely, Hawaiians don’t need to hear Dr. Jill Biden tell them that they need to get vaccinated.

This sounds a lot more like the First Lady was ready for a vacation away from DC…and how nice for it to be paid for by the U.S. government.

However, in a quick bout of karma, it seems that everything wasn’t tropical flowers and luaus for the First Lady. She injured her foot while she was spending time on the beach – before the two official events she was there for took place.

Apparently, Dr. Biden stepped on an object on the beach. She participated in the events as scheduled and, then, promptly flew back home.

Now, she has to undergo a procedure at Walter Reed National Military Medical Hospital so that she can have this object removed.

The White House press seems to be rather hushed about all of this. What is it that the First Lady has lodged in her foot? It must not have been too bad if she was able to participate in the two scheduled events. Yet, it must be bad enough that she had to go to Walter Reed. Why not just have it taken care of while in Hawaii?

Nothing ever seems simple with the Biden family. They love to have all eyes on them. And if it sparks a bit of drama, all the better.

The White House press has released one piece of information – President Biden will be joining her at the hospital. Really? If this is all because of something that has lodged in her foot, there seems to be a lot going on. Perhaps Biden is being a dutiful husband. Or, the White House is being less than honest about what is really going on – and that would not shock anyone.

For months, Dr. Biden has been doing her husband’s dirty work. Instead of traveling around the U.S. on his own to encourage everyone to get vaccines, he’s sent his wife. There are suspicions that the First Lady went since she had “Doctor” in her title – even though she’s a Doctor of Education instead of Medicine. Yet, we’re not supposed to get hung up on the details. It’s only misinformation if the conservatives say it.

Meanwhile, as the First Lady’s trip around the U.S. has come to a halt because of her medical procedure, President Biden has delivered his own address about vaccines. He’s decided that it’s time to play hardball. He’s all but demanding that people get vaccinated.

Federal employees will be “required” to get vaccinated or undergo multiple tests a week. Additionally, Biden has announced that the government will reimburse small businesses for giving time off to employees so that they can get vaccinated.

There’s definitely a push for being vaccinated. However, Biden could have done all of this from DC. There was never a need to send Dr. Jill Biden anywhere. He could have saved the government a lot of money and she wouldn’t have gotten injured on the beaches of Hawaii.