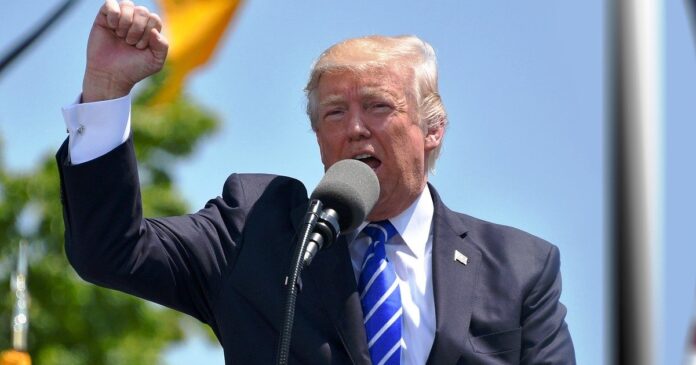 Former President Donald Trump reminded conservatives of one of the reasons they miss his administration just days ago when he weighed in on the devastating border crisis just days ago.

Trump took an aggressive and hands-on approach to border security, indicating that he felt it was one of the most important issues that Americans could address in the interest of national security.

It’s no surprise then, that the president who touted a platform of “America first” would not look kindly on a successor who returned to the kind of devastating policies that left Americans open to attacks from gangs, exposure to drugs, and potentially the victims of further terror attacks, should Mexico’s security be as lax as our own.

The Post Millennial reported on Trump’s sentiments, printing his statement in full:

“When I was President, our Southern border was in great shape – stronger, safer, and more secure than ever before. We ended Catch-and-Release, shut down asylum fraud, and crippled the vicious smugglers, drug dealers, and human traffickers. The wall, despite horrendous Democrat delays, would have easily been finished by now, and is working magnificently. Our country is being destroyed at the Southern border, a terrible thing to see!”

Dan Bongino’s website blasted the former president using Trump’s statement, citing the numerous examples of the current administration mishandling the flood of immigrants that hope to enter the country.

Even those working under the current administration are struggling with the policies of the Biden administration. Immigration and Customs Enforcement Director Tom Homan said that the administration’s catch-and-release policies appear to be making the way for widespread amnesty and devastating security measures.

“This is the first president in the nation’s history that’s facilitating illegal immigration at our southern border,” Homan declared according to BizPac Review.

Homan warned in January that “You’re going to see a surge at the border that we’ve never seen before” thanks to Biden’s open-border promises.

According to recent reports, around 100,000 illegal aliens were apprehended at the border in the last four weeks alone.

“That’s triple what was a year ago under Trump policies…when you release thousands of people into the United States, some with even COVID, and you don’t want to detain them, then you send a clear message to the world. So their actions speak much louder than what the words are attempting to do,” Homan asserted.

“In [2014-20015], we built detention centers, we built 3,000 family beds, we built adult facilities, we held people, and after they lost their case, ICE removed them…The surge went down because we ended the enticements. They’re doing it the complete opposite now, not by accident, not by incompetence, but by design. This is an open-borders agenda, and they’re not hiding it very well,” he insisted.

This should come as no great surprise to anyone who understands world politics and the nature of the reputation of the United States. In addition to the growing unrest in the nations south of the United States, the ever-expanding government subsidies that are being given to anyone and everyone who can’t or won’t work, are being given everything they might want, at great cost to taxpayers.

Those perils are nothing compared to what is suffered by the children who are trafficked in and out of the United States through the southern border. The idea that the United States government could turn a blind eye to the business of bodies is nothing less than a human rights violation on the grandest scale.

The answer to these problems isn’t new legislation or anything groundbreaking. It’s just enforcing the laws we already have and following up on the promises given to Americans by virtually every politician in the country, up until the last five years.