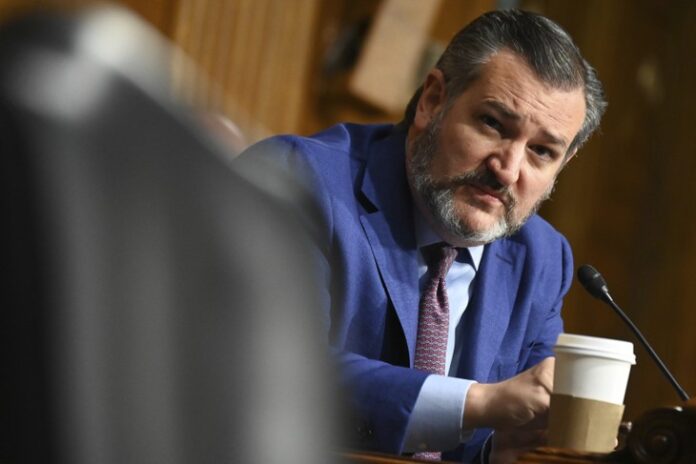 Remember when Donald Trump promised to drain the swamp? While he succeeded in some ways, too much of the vile liberal trash remains. The good news is that Ted Cruz is ready to expose it all for what it is.

There’s a lot of trash piling up in DC, and it’s all because of liberal swamp monsters like Nancy Pelosi and Chuck Schumer. They’ll use any state of emergency or crisis happening in the country as a way to mask the trash legislation they want to pass.

The COVID relief bill that was passed through the Democratic-led House and Senate and signed by the Democratic president is proof that the DC swamp is still festering with disgusting politicians who wish to waste money.

The bill, which is just shy of $2 trillion focuses on bailing out states that are responsible for their own tanked economies. Then, they’ve managed to spend money on union pension programs and even money on overseas programs that have nothing to do with providing relief from COVID.

It’s as if every Democrat through in a wish list of their pet projects and agreed to sign it as long as their project got funding.

As if to make it okay, they gave $1400 to citizens – even though it’s all their money anyway. It’s a pacifier for Americans to just shut up and accept the money.

Want to understand why we’re so divided? Why each side seems to live in alternate universes? Take a moment & examine the misinformation here (both deliberate & inadvertent).

Ted Cruz was a voice of reason on the Senate floor. If all of this is going to go through, let’s, at the very least, add an amendment to ensure that illegals aren’t going to receive a stimulus check. Oh, and also convicted criminals currently in prison.

What? How un-American can Ted Cruz be? The Democrats wouldn’t even dream of such a thing, and it led to quite the exchange between Cruz, Dick Durbin, and majority leader Chuck Schumer.

As Ted Cruz points out, though, the amendment also prohibits sending money to criminals currently in prison, such as murderers and rapists. After all, they’re not exactly out there stimulating the economy, so what’s the point of sending them the money?

Democrats voted against the amendment. To be clear, they voted in favor of sending $1400 to every criminal in prison. That adds up to billions of dollars that could have been used in countless other (and more productive) ways.

2/x …my amendment to prohibit sending those $$ to criminals (murderers, rapists, child molesters) currently IN PRISON.

EVERY Dem voted to send criminals the $$.

FACT 3: I then called up my amendment to prohibit illegal aliens from getting the $1400 checks.

Durbin still believes that no illegal immigrants would get money because of Social Security numbers.

Is Durbin this naïve? There are countless people who are in the country illegally because they’re on expired work visas and Green Cards. They’re identified as “visa overstays.” They were given Social Security numbers, they let their visas lapse (or were rejected for renewal), and are now categorized as illegal.

As Cruz points out, this isn’t some kind of administrative oversight. Those with a visa overstay are moved into the category of “Deportable Status.”

So, rather than deport these individuals, Democrats have chosen to keep them all happy and illegal by letting them stay AND giving them $1400.

Dick, that means what you said on the floor was FALSE. https://t.co/1aUeSxpTul

Although various liberal media outlets want to side with Durbin by calling Ted Cruz a liar, it’s important to rely on a more reliable source. The US Customs and Border Protection has said that Cruz is correct. If they overstay their visa, they’re here illegally. And if they were given a visa, they have a Social Security Number. And with a SS number, they can get the stimulus.

When are the Democrats going to realize that they can’t continue to call people liars without being fact-checked?

Ted Cruz is villainized for pointing out the truth.

9/x …reflexively believe his gals charge that I was the one lying.

FACT 14: When the checks go out, millions of illegal immigrants WILL GET $1400 checks.

We have to do better as a country. We have to drain the swamp. Otherwise, people like Durbin and the rest of the Democrats will continue to pass legislation that allows 675,000 people to overstay their visas in the country AND make money. That’s close to $1 billion out the door simply because the Democrats are ignorant.