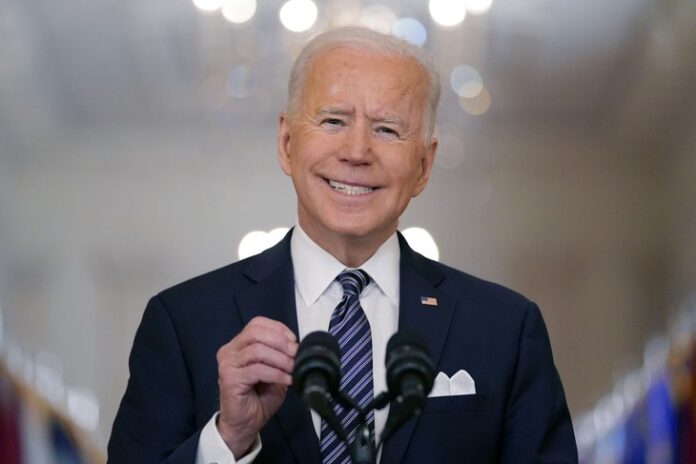 Even the Fake News New York Times’ Peter Baker noted, “At this point in office, Trump had given five news conferences. Obama had given two, George W. Bush three and Clinton five. Biden so far has given zero.”

The current White House has a policy regarding President Joe Biden and his appearances: Anyone But Biden (ABB).

Biden speaks if and only when he must. If an advisor, cabinet secretary, government flunkie, or elected official other than Biden can speak for this president they will — because the disaster of a Biden press conference is a known outcome.

But Biden’s press conference won’t be a disaster for the reason you may think: many would probably consider President Biden’s decrepitude, short-circuited public speaking, and his ability to make a deranged comment on a dime the largest liabilities to Mr. Biden.

Rather than these enfeebling handicaps it is the radical policy agenda of the Biden administration that would be on full display that would alert the American public to the fact that, despite his wax-like demeanor, President Biden’s agenda is radical, extreme in its aims (e.g., defunding the police) and promotes socialism in America.

At this point in office, Trump had given five news conferences. Obama had given two, George W. Bush three and Clinton five. Biden so far has given zero. @farhip https://t.co/h4HVeyd8kx

U.S. citizens are leaving the Democratic Party in droves because of the socialism swallowing the party. Socialism already destroyed California, Venezuela, Cuba, China, and the USSR. Do we really need any more examples? The American people know that socialism is fundamentally incompatible with the Founding principles of the United States.

The Democrats now proudly claim their reputation as the party of riots, defund the police, socialism, and anti-American destruction.

President Biden would actually have to answer an unprepared question about his unlimited abortions agenda, the open border crisis, and the Democrat Congress’ radical attacks on the First Amendment, families, and religion.

We are in a pandemic which has killed over a half a million Americans. Which he inherited. He is moving at break neck speed. That’s more important right now. WAKE UP.

All of that is bad news for President Biden who no longer so much grasps ideas as he paws them.

In another life Joe Biden would be a Mississippi river boat gambling proprietor. Unfortunately, in this one Joe Biden is the President of the United States of America. He also reminds one of a faltering fax machine.

DC media are trying hard to normalize their past coverage of Trump by “tan suiting” Biden but from the look of these ratios, twitter isn’t buying what they’re selling …. pic.twitter.com/M70x7wbMUs

The United States has big priorities at home and around the world on its plate. Meanwhile, President Biden is searching under the table for his dentures.

All of these snipes may be unfair to President Biden, but all’s fair in love and war. Somewhere in between there is politics.

In the 80s through the 90s and even until the end of the Obama presidency, Joe Biden was a spry and sprite speaker with a commanding presence and command of the issues despite his more than occasional capacity for wild sprees of unhinged, confusing, and concerning moments. Today, MENSA wouldn’t let President Biden clean their bathrooms.

Now is when we remind the reader that the headline of this article promised you the opposite of what you would expect.

Mental dilapidation aside, it is President Joe Biden’s radical partisan politics and socialist agenda that shuts down American jobs and surrenders to China that would be exposed for its extremism, which is wrapped in the wax paper of the Biden presidency.

People might ask hard questions of President Biden in a live press conference. And I don’t mean gotchas, but substantial inquiries about the Biden-Democrat regime’s socialist revolution.

People might want to know about the avowed socialists honeycombing the Biden administration, such as the nun-suing abortion radical and Chicano separatist socialist Xavier Becerra.

U.S. citizens will now be interested that a socialist Attorney General from California is now going to influence, for instance, West Virginia and Arizona’s health care, which includes implications for Sen. Joe Manchin (D-WV), Kyrsten Sinema (D-AZ), Mark Kelly (D-AZ), along with Georgia’s freshmen Democrat senators who, not unlike cat burglars, snuck into the Senate in a runoff by beating a divided Republican Party.

With a devout baby butcherer and transgender supremacy maniac as the U.S. Health Secretary attacking individual rights, religion and your health care freedoms – U.S. citizens will remember when they vote that all of these disastrous attacks on your freedom are all now standard products of the Democrat Party, the party of socialism.

That’s the press conference President Biden doesn’t want to have. Because there are no good answers for the direction that the Democrats are headed. They see the light — their political twilight, as U.S. citizens of all stripes flock to the Republican Party as the freedom party — and they are scrambling to secure power. They will use socialism and unconstitutional means to achieve their aims, puppet president riding shotgun — if you don’t stop them. Americans can by electing conservatives.