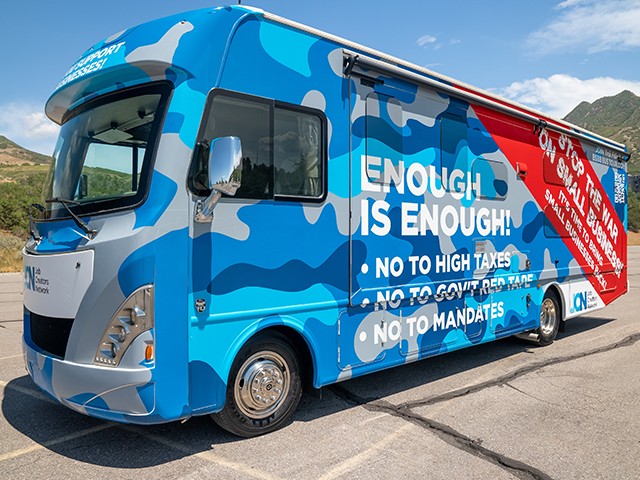 Democrats were about to pass an unwieldy cap and trade system on carbon dioxide emissions that would dramatically raise energy prices. Yet in one of the great victories for the conservative movement, a grassroots coalition of ordinary Americans came together that summer and revolted. They made it known to their representatives in their home districts over the August recess that they wouldn’t be reelected if they passed this big government bill.

Those who want to keep America America must mount a similar rebellion this month to Democrats’ efforts to pass several trillion dollars of new spending that would amount to the largest expansion of government since the Great Society programs of the 1960s. Americans must make it known they won’t allow Democrats to fundamentally transform the country and wage war on small businesses without a fight.

Democrats are in a rush to pass a $1.2 trillion infrastructure bill that’s infrastructure in name only. According to a new analysis by the Committee to Unleash Prosperity, only one in four dollars in the bill goes to roads, bridges, and airports. The rest is more wasteful spending on long-held Democrat priorities like railroads, electric charging stations, and a potential mileage tax that would hit middle-class commuters hardest.

On its heels, Democrats want to quickly pass a $3.5 trillion budget through reconciliation that would implement new cradle-to-grave entitlements, tax credits, and energy mandates. (The nonpartisan Committee for a Responsible Budget pegs this bill’s actual cost at over $5 trillion.)

President Biden and Congressional Democrats plan to fund this reckless spending by taxing small businesses at some of the highest levels in the world. Biden’s proposed capital gains tax increase would require entrepreneurs who sell their businesses to pay roughly 50 percent of their earnings in taxes, including state obligations. Biden plans to raise taxes on the more than one million American small businesses structured as corporations by one-third.

Democrat Sen. Ron Wyden has introduced legislation to curtail the 20 percent small business tax deduction that led to historically low unemployment rates and shared economic prosperity before the pandemic. The tax increases and regulations associated with this spending can only be described as a Democrat war on small businesses.

This unprecedented spending would also exacerbate already-high inflation. According to the Job Creators Network’s Monthly Monitor poll, inflation is the biggest concern of American small businesses. That’s no surprise when you consider the consumer price index is at its highest level since 2009, gas prices have risen by about 50 percent since Biden was elected, and half of the second-quarter nominal GDP growth is phantom inflation gains.

Even liberal economists like Larry Summers warn that this spending binge risks driving inflation “of a kind we have not seen in a generation.” As Milton Friedman observed, “Inflation is always and everywhere a monetary phenomenon.” Trillions of dollars of new spending would dramatically increase the money supply, leading to more dollars chasing after the same number of goods and services.

President Biden and Congressional Democrats believe that they know better than ordinary Americans how to spend your money. That’s the fundamental premise of a socialist economy. Democrats are trying to leverage their slimmest of majorities to pretend they have the mandate to achieve Bernie Sanders and Alexandria Ocasio-Cortez’s vision where the government controls the resources of small businesses and ordinary Americans.

Americans who recognize this dangerous federal spending must fight back this summer by making it clear to their elected representatives that it’s unacceptable. I’ll be touring around the country on a Bring Small Businesses Back bus tour making this exact point. We encourage you to get on board. To defeat this unprecedented spending, Americans must make their voices even louder than 12 years ago. If we do, we can achieve an even bigger conservative victory that will pay dividends for decades to come.

Alfredo Ortiz is the president and CEO of the Job Creators Network.