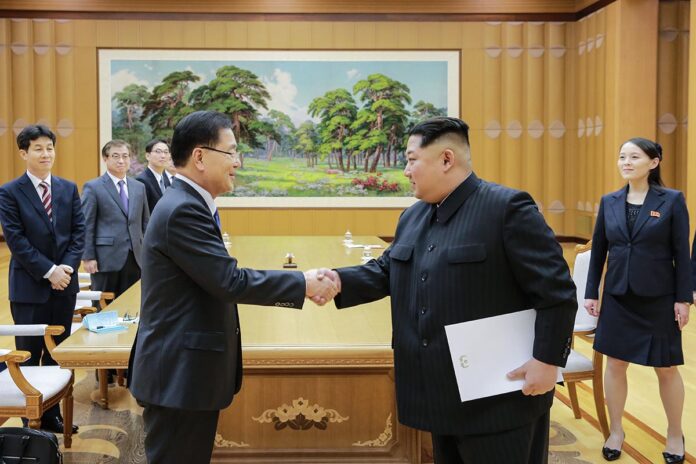 North Korea has been lobbing threats at the US for decades. But it’s difficult to take the tiny hermit nation, roughly the size of Pennsylvania, with anything other than a grain of salt. Outside of occasionally test-firing a rocket to appease their frumpy childlike leader Kim Jon Un, their bark is immensely louder than their toothless bite.

With Joe Biden now at America’s helm, North Korea is uncomfortable. They knew where they stood with Donald Trump, but with Biden being a Xerox copy of Obama, the next four years could go either way. Amid continuing rumors of Kim Jon Un’s failing health, a new ominous figure has emerged over the past couple of years. His one and only sister, Kim Yo Jong.

Professor Natasha Lindstaedt, known for her expertise on totalitarian regimes, said, “I don’t believe that her being a woman will weaken her position if she takes over as leader. These people are not viewed or portrayed as even being human-like to the people of North Korea – as we have seen with Kim Jong-un. They are presented as gods who can make everything better.”

“It is possible she will adopt an even harder line than her brother in dealing with the rest of the world because of the level of poverty. There is nothing else – it is all they have. I do believe she is as tough as her brother and she has been very visible in recent times.”

An American expert on North Korean affairs, Sung Yoong Lee said, “It is entirely possible Ms. Kim would be even more tyrannical than her brother, father, or grandfather. She will have to show her mettle by provoking the US with major weapons tests and lethal attacks on South Korea and US forces stationed there.”

As a way of lexing her biceps, Kim Yo Jong just issued a warning to the Biden administration to stay out of North Korea’s business. Her statement said that the US needs to “refrain from causing a stink” if it wants to “sleep in peace” for the next four years.

In North Korea’s first comments directed at the Biden administration, Kim Jong Un’s powerful sister on Tuesday warned the United States to “refrain from causing a stink” if it wants to “sleep in peace” for the next four years. She issued the statement as U.S. Secretary of State Antony Blinken and Defense Secretary Lloyd Austin were setting foot in Asia to pow-wow with Japan and South Korea over some ongoing issues, including North Korea.

The two US diplomats will be in Tokyo on Tuesday and in Seoul the following day, which undoubtedly makes Kim Yo Jong apprehensive over what’s going on. So she barked. “We take this opportunity to warn the new U.S. administration trying hard to give off (gun) powder smell in our land. If it wants to sleep in peace for coming four years, it had better refrain from causing a stink at its first step.” Woof. Woof.

Having a weak arsenal and an army of poorly fed untrained troops, Kim Yo Jong resorted to hitting below the belt. She threatened to cancel all South Korean Tours to North Korea’s famed resort on North Diamond Mountain. She failed to mention how tours have slowed down anyway since a South Korean tourist was shot and killed at the resort in 2008.

The North “will watch the future attitude and actions of the (South Korean) authorities,” before determining whether to take exceptional measures against its rival,” her statement continued. What could possibly be more alarming than closing a mountain resort?

Professor Leif-Eric Easly of international studies at Ewha University in Seoul summed the statement up nicely by saying, “This is Kim Yo Jong continuing to be the tip of the wedge North Korea tries to drive between South Korea and its U.S. ally. North Korea’s latest threats mean the allies have precious little time to coordinate their approaches on deterrence, sanctions, and engagement.”

The Biden administration says they have reached out to the self-professed gods of North Korea through multiple channels but keep having to leave a message at the beep. Kim Yo Jong’s idle warning was the first they have heard from anyone. So while the impoverished nation does warrant keeping an eye on, it’s doubtful they have any aces up their sleeves that haven’t already been played. Ho. Hum.