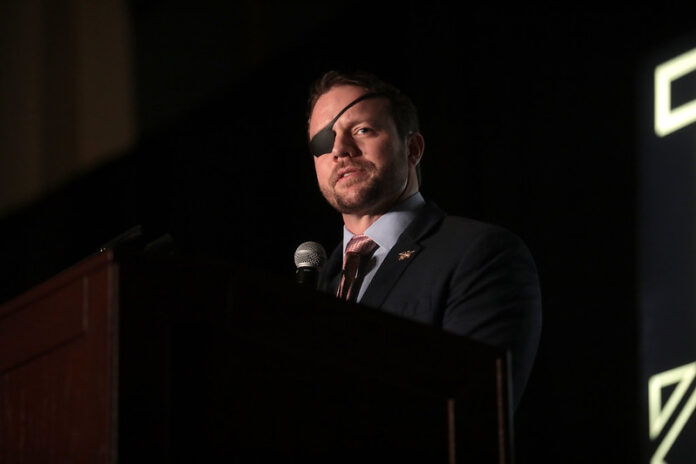 Republican favorite Rep. Dan Crenshaw (R-TX) lashed out at White House Press Secretary Jen Psaki for her Monday claim that the Biden administration was left with a mess to clean up.

Psaki said “the last administration left us a dismantled and unworkable system” when she was called on the carpet about the crisis on the southern border.

This exchange came after a mid-February report from Newsy that said the Biden administration was continuing Trump’s vaccine distribution model, this after Biden claimed former President Donald Trump mishandled the COVID-19 crisis:

The Department of Defense confirms to Newsy that the Biden administration is still using the same vaccine distribution model developed by Operation Warp Speed under Trump and that effort is still being overseen by Gen. Gus Perna — who led the effort last year.

“Centralized distribution is being managed by the CDC through an existing contract… to deliver vaccines and supply kits… We continue the mission to accelerate the development, manufacturing and delivery of safe and effective vaccines and therapeutics, and Gen. Perna continues in his role overseeing this effort,” said Laura Ochoa, a spokeswoman for Gen. Perna.

Now, faced with increasing pushback on their border policy, the Biden administration is again claiming that they started their efforts behind the curve. NBC News reported Sunday:

The numbers are stark. More than 100,000 migrants attempted to enter the U.S. in February, more than three times the amount for February 2020 and the highest level for the month in five years.

CNN’s senior White House correspondent Phil Mattingly asked, “Given how fast-moving the situation has been, does the president believe that his administration has a handle on what’s happening on the southern border right now?”

“We certainly do,” Psaki answered when questioned by the reporter. “Let me just give you a bit of an update on a couple of the steps that we’re taking. First, let me say that, like COVID, obviously a different issue, but we recognize this is a big problem. The last administration left us a dismantled and unworkable system, and like any other problem, we are going to do everything we can to solve it. Our focus here is on solutions. Let me just walk you through a couple of the steps, and we’ve done this a little bit, but there’s always, of course, developments on considerations that are underway.”

“First, we’ve updated, or we have not, but CDC has updated guidelines to return to full capacity,” Psaki continued. “This will help expand capacity to move children more quickly out of CBP facilities. That’s an important step. The implementation of that is, of course, ongoing. There’s now an embedding at the president’s ask of HHS and ORR staff with CBP, which will allow government to more quickly ID, vet, confirm sponsors and family members of the unaccompanied minors, and will lead to quicker placement. … FEMA, this was an announcement over the weekend, is now supporting, providing support at the border, adding extra capacity to HHS for quick processing to avoid overcrowding. … We rescinded the 2018 MOU between DHS and HHS, which we believe will encourage families and sponsors to come forward without fear of additional immigration enforcement.”