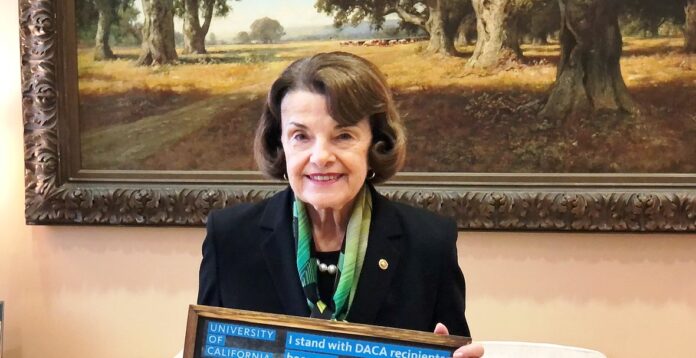 For years, the political left has claimed “assault weapons” as pretty the bane of our existence. As such, they are constantly trying to push some form of a ban on them or another.

If you are familiar, even in the slightest, with firearms, you will likely know that there is no such category of guns labeled as “assault weapons.” If you were to go to any gun store right now, you wouldn’t find any weapon anywhere with the words assault weapon in their name or description.

In fact, they are nothing more than a made-up name given to various firearms by the political left and activists opposed to our Second Amendment for any type of gun they deem as “scary looking.” You know, like rifles, which are the most common form of firearm in America and used for a variety of practical purposes other than mowing down children in a schoolyard.

But that fact doesn’t change how the left perceives them. And apparently, if leftist leaders like Senator Dianne Feinstein believe they look scary, who are we to argue with whether or not they should be banned?

At least that seems to be her thoughts on the matter, as she has recently and once again proposed another bill that would ban a number of “assault weapons.”

So, just how many of these terrifying guns are we talking about?

Well, according to the California Democrat’s legislation, 205 models of guns, to be exact.

The bill was introduced on Thursday and would seek to ban “military-style assault weapons and high capacity ammunition magazines.

Feinstein said in a recent statement, “It’s been 17 years since the original Assault Weapons Ban expired, and the plague of gun violence continues to grow in this country.”

“To be clear, this bill saves lives. When it was in place from 1994-2004, gun massacres declined by 37 percent compared with the decade before. After the ban expired, the number of massacres rose by 183 percent. We’re now seeing a rise in domestic terrorism, and military-style assault weapons are increasingly becoming the guns of choice for these dangerous groups.”

Now, I’m not sure where she’s getting her information, but I have to say it sounds terrible.

The only problem is that it’s a complete farce, and even the liberally backed PolitiFact confirms her statistics as lies.

According to the outlet, “The ban’s impact remains unclear.” The data received on the ban does not in any way show a direct correlation between the ban and the number of “massacres” happening within that time period.

Another thing to note is that Feinstein’s new bill isn’t exactly the same as the one implemented in 1994.

As Jacob Sullum points out, the former ban could only be used against a particular weapon if it had two “military-style” characteristics. The new bill only requires one for a ban to be in place.

The bill also expands what those military-style characteristics are. They now include any things like a “forward grip,” a “threaded barrel,” a “pistol grip,” a “barrel shroud,” and even a “grenade launcher.”

Just to let you know, grenade launchers are pretty rare, showing up more in video games than in real life. And barrel shrouds… these are nothing more than a covering over the barrel to protect the user from getting burned on accident.

But apparently, they make the gun look scarier.

However, Feinstein seems to contradict herself in the bill by allowing already purchased “military-style assault weapons” to be grandfathered in and permitted.

Sullum wrote, “Like the 1994 law, it does not prohibit the possession of “assault weapons,” meaning that millions of “these deadly weapons’ will remain in circulation even if compliance is perfect.”

The law would just ban the purchase, not the possession, of such weapons…

Of course, it’s not like the bill will get passed anyway.

And even if it does, the Supreme Court is liable to strike it down as unconstitutional.  Per a ruling made by the court in District of Columbia v. Heller, guns in “common use for lawful purposes like self-defense” are protected under the Second Amendment and, therefore, cannot be banned.

It’s just one more Democratic-led bill that ignores all common sense, all factual gun information, and all knowledge of the Constitution.