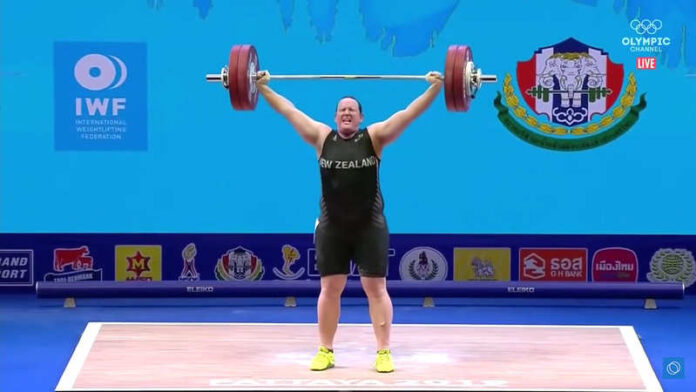 Apparently reporters at the 2020 Tokyo Olympics were told to ignore reports of the “unfair advantage” transgender athletes might have against other opponents. It was suggested that any talk of advantage was “misinformation.”

PA Media reported recently that “journalists attending the Tokyo International Forum for the event ‘were handed a 20-page guidebook prepared by three LGBT activist groups with the approval of the International Weightlifting Federation,’” according to “The Blaze.”

It was detailed by PA Media that “The guidelines urged media to ignore ‘misinformation’ that transgender athletes have an ‘unfair advantage,’ and asked them to ‘familiarize yourselves with this anti-LGBTQ groups and their campaigns targeting transgender access to sports,’ including the UK-based Fair Play For Women.”

The report also noted specifically that Laurel Hubbard, a male weightlifter who identifies as a woman, took no questions from the press after losing the +87kg weightlifting competition on Monday.

The 43-year-old athlete also said, “But one of the things for which I am profoundly grateful is that the supporters in New Zealand have given me so much and have been beyond astonishing.”

Hubbard acknowledged that her participation in the Tokyo Games was not entirely without controversy, but described the New Zealand Olympic Committee as having been wonderful and she was grateful to them.

But there were many critics, including female athletes and female weightlifters, who spoke out about Hubbard’s participation in women’s athletics. They described the unfair advantages biological men have over women, even when the athlete is in post-hormone therapy. This is noted in the British Journal of Sports Medicine.

Hubbard described the support she had for the International Olympic Committee. Dr. Richard Budgett, the IOC medical and science director, praised the transgender weightlifter last week and said that “everyone agrees that trans women are women.”

Budgett also explained, “To put it in a nutshell, the IOC had a scientific consensus back in 2015. There are no IOC rules or regulations around transgender participation. That depends on each international federation.”

The doctor said that Laurel Hubbard was a woman and would compete under the rules of her federation. He declared that we should pay tribute to her courage and tenacity shown in her willingness to compete and qualify for the Games. “There are lots of aspects of physiology and anatomy, and the mental side, that contribute to an elite performance. It’s very difficult to say, ‘yes, she has an advantage because she went through male puberty,’ when there’s so many other factors to take into account,” Budgett said.

He also added, “It’s not simple. Each sport has to make their own assessment depending on the physiology of that sport so that they can ensure there is fair competition, but also the inclusion of everyone – whether they’re male or female – so they are able to take part in the sport they love.”

Ross Tucker, a sports scientist, was on the BBC radio on Monday explaining the advantages biological males have over women. He said this was true irrespective of Hubbard’s Olympic outcome or even hormone therapy.

The BBC interviewer said, “The rules state that the athlete has to reduce their testosterone level.” And then he asked, “In your view, Ross, is that enough to allow a trans woman to compete in an event like weightlifting?”

Tucker responded, “The problem is that there’s an asymmetry where, once testosterone has done its job, and viewers will know what that job is — it’s basically the development of male characteristics which we see so prominently during puberty and adolescence, so we’re talking muscle, bone, decreased body fat, increased heart and lung size — all of which adds up to strength and performance advantages.”

Ross also said that “Even the suppression of testosterone, as is required, leaves behind a considerable residual advantage that then means it’s unfair to cross into the woman’s sport category.”