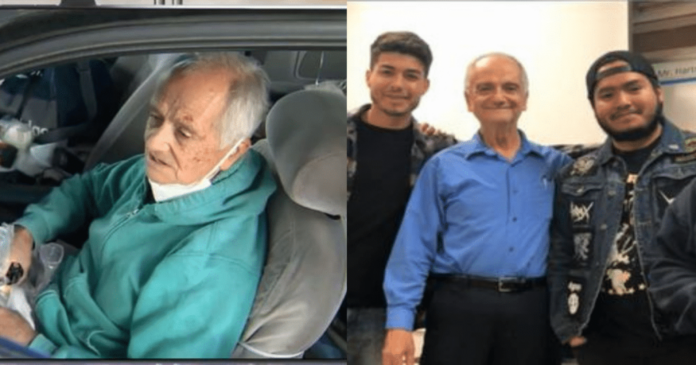 In this day and age, social media gets quite easily get a bad rap. There is just so much negativity to be seen and heard out there anymore. However, this is not one of those instances. And it is all the proof we will ever need that even what seems to be the worse thing for our nation and society can be used for good.

Like most young adults, he has all the latest social media connections. However, unlike far too many, he hasn’t let those platforms distract him from what’s really important in life: Helping others.

In fact, he recently just chose to use his social media accounts to raise a whopping amount of funds for a former teacher in need.

It all began when Nava noticed an older car regularly parked along his residential street. But unlike most of the other parked vehicles, this 90s era Thunderbird was usually occupied, as in someone was always sitting in it.

So Nava kept an eye on it. What he saw was an older man drive to that location daily, park the car, and then never get out.

He realized the man was living out of the car. Eating in it, sleeping in it, and driving it back and forth from work.

Another thing Nava noticed was that the man looked very familiar. After closer inspection, Nava realized that the man was Jose Villarruel, a former substitute teacher who regularly worked for the school Nava attended in high school. The man was so well known in the school that most kids referred to him lovingly as “Mr. V.”

Naturally, Nava became curious about how Mr. V had come to begin living out his car.

As he explained to KTTV, I usually see him almost every single day and it got me thinking, ‘I’ve got to talk to him and know his situation.”

He learned that Mr. V had fallen on hard times when the pandemic hit and schools were closed. And with no end to the pandemic and the near draconian rule of some Californian Democratic leaders, he believed his days as a substitute were over.

He told Nava and KTTV, “I decided the school situation has changed completely and I believed that a job of a substitute was over. In May, I submitted my resignation. I managed to do all of the paperwork, all of the arrangements to get my pension. I got my check, but that check didn’t last long because I had debts already.”

Eventually, the car was all he had left. And he came to terms with that, knowing that he still had it better than some.

“My body has been adapted to all the bumps and things from the seat. It serves me as transportation, serves me as a dining room, and serves as a bedroom.”

Nava, on the other hand, was less satisfied with the situation.

He told KTTV, “I was just devasted and gutted for the reality of the pandemic and how it’s left teachers without a job, and you this is one of the results, and it’s sad to see one of your own teachers go through that, so it only makes you want to help out more.”

And help out, he most certainly did.

Initially, it was $300, but Nava felt like he could do more.

So he went to social media and told Mr. V’s story.

He posted on Twitter and TikTok. And within no time at all, it went viral. Even the mayor of Fontana became interested in the story.

This encouraged Nava to create a GoFundMe account for Mr. V.

Other former students joined Nava to help our Mr. V in his time of need, offering what they could. Funds began to roll in, and a plan was made to throw Mr. V a birthday party and surprise him with those funds.

Mr. V was shocked and humbled when a check for the sum of $27,000 was placed in his hands by the students.

He said, “My initial thought was, ‘Am I dreaming?’ I still can’t get over this experience.” He never expected to get anything at all from these kids, much less the break he needed to push his life forward and get back on his feet.

Of course, like all humble and deserving men, Mr. V says the experience has left him wanting to do more good in the world and give back as much as he can.