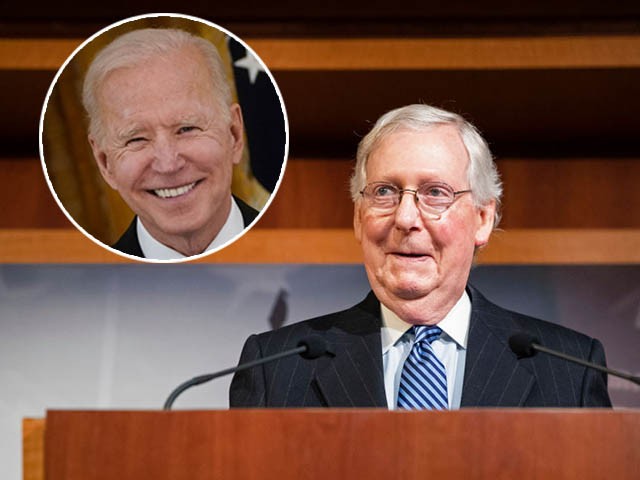 “I think the president deserves a lot of credit for getting the Democrats open to reaching a bipartisan agreement on this bill,” McConnell said in an interview with the Wall Street Journal.

The president reciprocated McConnell’s praise at the White House on Tuesday.

“Today, we proved that democracy can still work. A lot more work to do,” Biden said. “But I want to thank the Republican — Senate Republican Leader Mitch McConnell for supporting this bill.”

McConnell addressed his comments in April that he was “100 percent” focused on stopping Biden’s agenda, clarifying he was always open to doing business with the president on moderate issues.

“Infrastructure is popular with both Republicans and Democrats,” McConnell said.

He argued that a divided 50-50 senate meant Americans wanted Republicans to work together with Democrats.

“If you’re going to find an area of potential agreement, I can’t think of a better one than infrastructure, which is desperately needed,” McConnell said.

But McConnell was cool to the idea of deficit infrastructure spending when former President Donald Trump proposed it.
In 2016, McConnell specifically panned Trump’s idea of a “trillion-dollar stimulus” on infrastructure, noting that “the issue of how to pay for it needs to be dealt with responsibly.”

Biden’s bill, which McConnell voted for on Tuesday, spent $1.2 trillion.