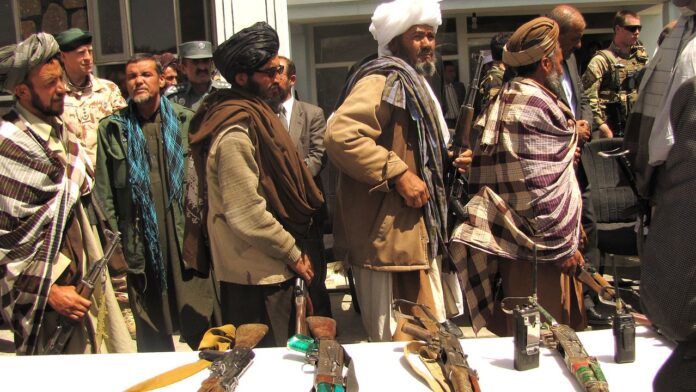 While U.S. and NATO forces are consumed with high-tailing it out of Afghanistan, the Taliban are swarming like starving locusts throughout the country. Almost as though the Taliban had a secret reserve unit hiding in plain sight waiting for this day, their numbers, as if by magic, have significantly multiplied. And they aren’t letting one grain of sand settle under their sandals.

Capturing their second provincial Afghanistan capital in a matter of days, Taliban militant forces are in full speed ahead mode. They’ve claimed large territories in Afghanistan’s rural countryside from which to further build their strength and launch bloody attacks, sparing no one who defies them. This is the fourth capital city to fall.

While Taliban troops have been busy lopping heads, their strategic planners have been plotting ways to assassinate every senior government official in Afghanistan’s capital city of Kabul. This would be the easiest method for allowing them to simply waltz into town with no one left to stop them.

The best thing the international community and the U.N. could think of was to inform the Taliban that if they were to conquer Kabul and become the ruling faction, they would not be recognized as such. Their lame approach broke no hearts.

Knowing that Afghanistan is now their oyster, the Taliban refuses to talk peace. Why should they? They’ve ignored every appeal made to them by the Afghan government.

Council chief of Sar-e Pul province, Mohammad Noor Rahmani, said that after a week of fighting the Afghan security forces were no longer a match for the Taliban. Militant forces overtook the province capital and the Afghan forces bugged out.

Afghanistan also has its share of private militias who support the government and protect the provinces in which they live. Militia commanders throughout the province were so ill-equipped they all threw up their hands and surrendered to the invading forces.

The city of Sar-e Pul, Zaranj, Shibirghan, and Taleqan, are all under Taliban control. the capital of another northern province with the same name. They are currently descending on Kunduz where they casually walked into town and boldly planted their flag in the middle of the town square. At this point in time, there is absolutely nothing standing in their way.

Kunduz is a city of 340,000 residents that was strongly defended for decades by U.S. and NATO troops. It would provide them with a major gain while at the same time allowing the Taliban to rub mud in the faces of the withdrawing troops. Win/win.

Here’s the real shame of the matter. America, along with the help of a few other nations, has spent billions upon billions of dollars training and supplying equipment to Afghan forces so they could eventually be capable of defending themselves. In the process, American lives were sacrificed. Eventually came and went a long time ago. You can’t save ’em all.

Over just the past three days, the Taliban has ruthlessly murdered at least 27 children in the name of Allah. Officials at UNICEF who reported this information also said, “These atrocities are also evidence of the brutal nature and scale of violence in Afghanistan which preys on already vulnerable children.” The agency also said that the Taliban has been very successful with recruiting children.

It couldn’t be any more transparent of how the troop withdrawal is clearing the way for a complete Taliban takeover, and it’ll happen much sooner than later. And they may rule for a while until those Afghans who don’t like them rise up in revolt. Then the entire process will begin again. Just as it has throughout Middle-Eastern Muslim countries for endless centuries.

The brutal mindset of the archaic Mid-Eastern world will never allow for the peaceful resolution of any matter, and they continue to behead, rape, enslave, and torture one another, all in the name of the same Allah, until the earth is no more. It’s a shame that so many lives and so much money were wasted on learning a lesson we’ll hopefully never forget. Some species can’t be tamed.